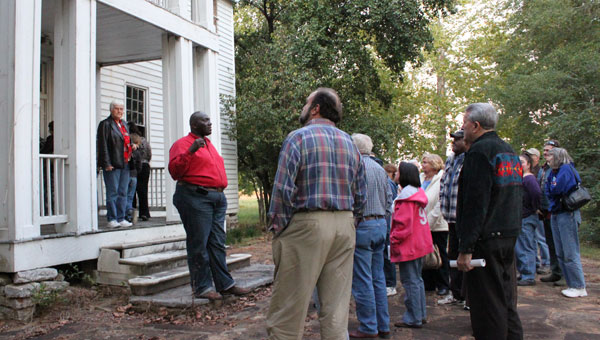 Harpersville Mayor Theoangelo Perkins gives the history of the Wallace-Kline House during the last year’s Harpserville Historical Tour. Perkins led the tour through Harpersville’s historical highlights, such as Old Baker Farm, Town Hall, the Harpersville Cemetery, the Datcher farm and Providence Baptist Church, as well as many other locations. (File)

HARPERSVILLE – The city of Harpersville and the South Shelby Chamber of Commerce are hosting the sixth annual Harpersville Heritage Tour Oct. 20.

The tour, which will conclude by noon, will take participants by bus and will include walking site visits as well. The tours admission is $20 per adult, $16 per child and free for children 5-years-old and under. The tour includes refreshments at the Harpersville Town Hall, a press release from the South Shelby Chamber stated.

The tour will highlight many of the town’s historically registered sites listed on the Alabama Register of Landmarks and Heritage. These properties are designated by the Alabama Historical Commission under the authority of the Alabama Legislature.

The tour also showcases two sites, the Chancellor House and the Newman Rock House, which are on the National Register of Historic Places.

Historic sites include the Harpersville Garden of Memories Cemetery, also known as the

Prideline Transportation will escort the tour group this year. Seating is limited to 33 seats, so make reservations as soon as possible.

“We have so much history right here in Harpersville that people do not know about, and they would be pleasantly surprised if they come and take the tour,” Perkins wrote in the release.

FROM STAFF REPORTS MONTEVALLO – The University of Montevallo baseball team will take on a challenging 50-game schedule in 2013,... read more