Senior outside hitter Emily Cosgrove created a dominant presence at the net for the Eagles and was key to Oak Mountain’s success. 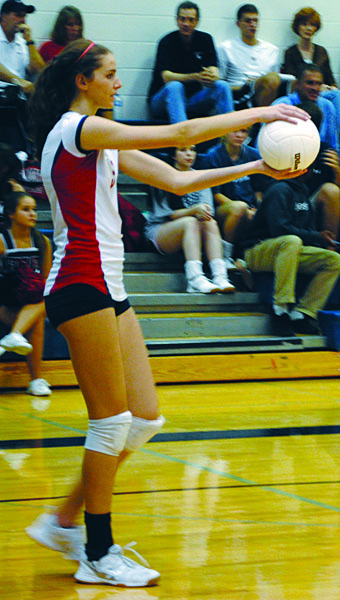 The match was hard-fought in its first game; the Panthers played a close set to challenge their unbeaten hosts.

“The first set was exactly what we were trying to do,” Pelham head coach Perry Robinson said. “They were upset that we were so close (going into the second set).”

The Eagles played a determined second set, gradually pulling away to a 14-point set victory.

Oak Mountain picked up right where it left off to begin the final set of the match, pulling ahead to a 7-0 lead before a Peyton McKinely service error gave Pelham its first point of the set.

The seven-point opening lead proved to be the difference. The Panthers fought back to play an even game for the rest of the set.

“It was a slow start, but once we found our rock again we started to play,” Robinson said.

After Pelham narrowed a 23-11 deficit to 24-18, Hannah Beach delivered the match’s decisive kill for Oak Mountain.

“It always feels good to win in three,” Cosgrove said. “You give everything you have in the first three games, and you can see it pay off.”

While the Eagles are set to finish the regular season in first place in Area 8, Pelham will host a key division matchup at home against Spain Park on Tuesday.

“Oak Mountain’s going to win the area undefeated, and they proved why tonight,” Robinson said. “We’ll play Dig in the Park on Saturday, Senior Night on Tuesday and we’ll keep getting ready for the area tournament.”