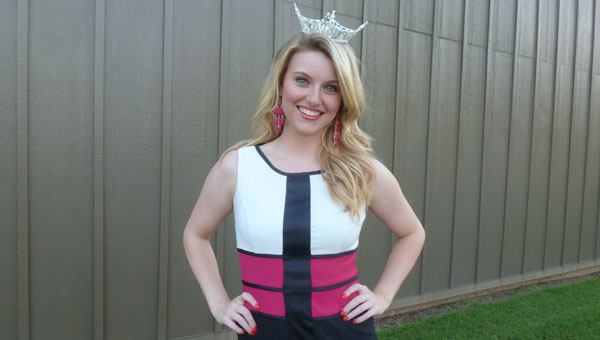 Brooks, daughter of James and Kelly Brooks of Altoona, was valedictorian of Clay-Chalkville High School. A teacher encouraged her to enter the Miss Clay-Chalkville pageant when she was a senior. Brooks was totally surprised when she won the title.

Brooks’ life forever changed at the Miss Alabama 2008 pageant after her scholarship interview. There were representatives from most colleges in Alabama who asked about her financial needs. No one in her family had ever attended college. Her parents are very hard working but did not have the resources to pay for a college education.

“The plan was always college,” said Brooks. “But is was going to be hard. I thought about taking a year off to save or starting at a junior college, but Miss Alabama made a four-year university possible right out of high school.”

Brooks competed in 23 pageants and was first runner-up nine times but did not win a title in 2009. Since then, she has won three other titles and this year Miss Shelby County. Through the MAO scholarship programs, she has graduated debt free from college and has enough tuition money for graduate school. Yet, she has never placed in the Miss Alabama pageant.

Community service has been a huge part of Brooks’ life since age 14 when she began volunteering with Birmingham Aids Outreach after a program in her health class. As president of the National Honor Society, she was required to do volunteer hours. Two times a week, Brooks volunteered at the Aids Outreach, which became her passion and ultimately her platform. Brooks won the Miss America Community Service Award at the Miss Alabama 2012 pageant as well as the Sonya Lefkovits Community Service Award at the Miss Shelby County Pageant for her outstanding service to the HIV/Aids community.

Hermecz is a weight loss inspiration

By PHOEBE DONALD ROBINSON / Community Columnist Mindy Hermecz is an inspiration to all who have battled with weight issues.... read more