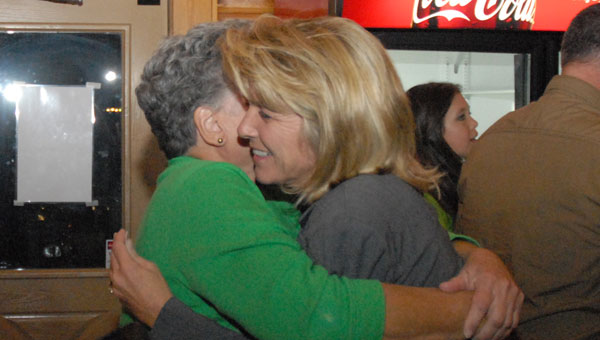 Marty Handlon will serve her first term as Alabaster’s mayor after she defeated incumbent Mayor David Frings during an Oct. 9 runoff election.

During the election, Handlon pulled in 55.5 percent of the vote, while Frings collected 44.5 percent.

After the election results were announced, Handlon celebrated with a large crowd of supporters at Buck’s Pizza off Alabama 119.

“I’m so excited to have the opportunity to serve,” Handlon said. “Now we can move forward with the plans I outlined in my platform. I will be Alabaster’s full-time mayor.”

Handlon said she plans to support small business owners in Alabaster, and would like to host quarterly meetings to hear and address the concerns of the city’s business community.

“I want to have a visible presence in the community,” Handlon said. “I think that will make a difference in our city.”

A message left with Frings was not immediately returned on Oct. 9.

Handlon is scheduled to be sworn in during Alabaster’s Nov. 5 City Council meeting.

Handlon, a certified public accountant, also ran during the city’s 2008 election, but lost to Frings in a runoff.

Handlon will serve for the next four years with a relatively unchanged Alabaster City Council. Incumbent council members Sophie Martin, Bob Hicks, Rick Walters, Scott Brakefield and Tommy Ryals faced no opposition in the general election, and were declared the winners of their races in early August.

The only new council member, Russell Bedsole, also faced no opposition in the race.