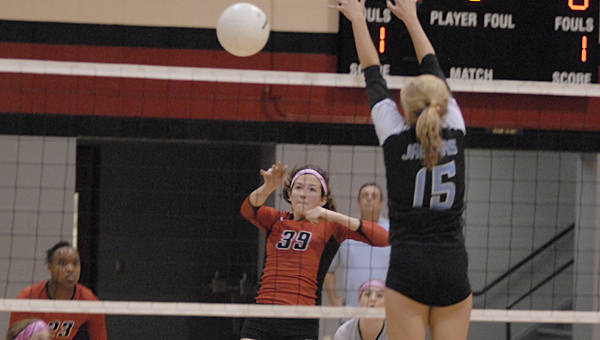 Spain Park only trailed once in the second set at 1-0, before the Jaguars outscored the Warriors 25-6 the rest of the way winning, 25-7.

Thompson let Spain Park jump ahead in the third set 7-3, before rallying to tie the score at 8 apiece.  Neither team was able to gain more than a one point lead until finally, Spain Park was able to claim a 15-13 lead.  The Jaguars did not relinquish it pulling away on a 10-5 run to win the set, 25-18.

In the fourth set, Thompson flipped the script from the second set by falling down 3-0 before taking the lead at 4-3 and did not surrender it.  The Jaguars did close the gap to within 17-15 late in the set, but were unable to get closer as Thompson won 25-18.

In the final set, Spain Park never trailed and finished the game on a 7-3 run to break open an 8-8 tie.

“I think Thompson played a great match,” Spain Park coach Paula Dill said. “I won’t take anything against them at all. Both teams played their hearts out.”

Dill did not waste anytime turning her attention to the next opponent though.

“Thursday night we have Oak Mountain and Oak Mountain again in the area tournament next Thursday,” Dill said. “We are in preparation to win that so that we can advance out. That is our goal.”