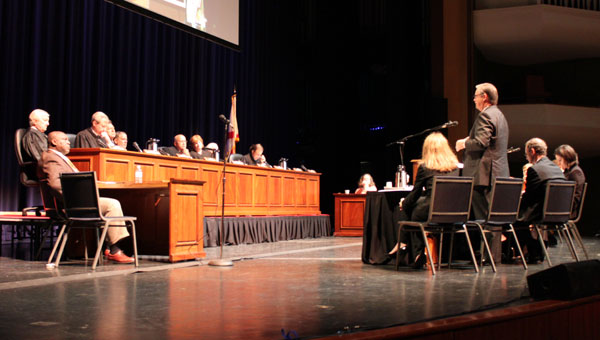 Samford’s Cumberland School of Law and the Birmingham Bar Foundation sponsored the special session, which took place in front of about 1,100 local high school students.

“This case is about who had fundamental authority to manage and control county financing,” said Montgomery attorney Kendrick Webb, who is representing the county and County Commission.

Due to a decrease of county revenue since 2007, the County Commission passed a resolution in 2010 that removed budgetary funding for merit-step raises for all county employees. Departments were required to inform the Commission how the department would provide merit raises without exceeding the appropriated budget, according to a case summary.

Four employees of the sheriff’s office filed a lawsuit against the County Commission on June 30, 2011, seeking back pay from Oct. 1, 2010.

Webb said the sheriff’s office merit raises would cost about $228,000.

“Don’t we have a situation here where the county commission has tried to dictate to him how he can and cannot use certain dollars within the overall appropriation for his budget?” Justice Glenn Murdock asked Webb.

“No, your honor. The County Commission simply requested the sheriff let them know where the money comes from,” Webb said.

“Why do they have to give that explanation? You appropriated $20 million (for the sheriff’s budget). Why don’t you let the sheriff spend it as he sees fit?” Justice Michael Bolin said. “If he spends it before Sept. 30, he just doesn’t have any more money. Why do you force him to say it’s coming from this line item or the other?”

“It is to prevent fiscal chaos, to prevent you coming at the end of the budget and there’s no more money to pay salaries,” Webb said.

Bolin then said if the sheriff spends the allotted funding before the end of the fiscal year, it’s the sheriff’s responsibility to budget the money appropriately.

Webb said the main reason the Commission asks for explanations on the sheriff moving funding involves the jail.

“We can’t allow for the jail to be shut down. It’s a dual responsibility of the County Commission and the sheriff,” Webb said.

Attorney Anna Dionne, who represents the Law Enforcement Personnel Board, said the sheriff’s only discretion in terms of merit raises has to do with the evaluation of the employees, not to say the money is not available for raises.

Attorney Raymond Fitzpatrick Jr., in representing the sheriff’s office employees, said the County Commission “grabbed the power” not implementing pay raises while deciding on a budget, as the sheriff “does not have the ability to write the checks to implement salary decisions for his employees.”

After the special session, Curry said the main issue of the case is political.

“We’ve got to work together and eliminate power grabs,” Curry said.

Curry said 140 employees were eligible for the merit raises, which would cost about $160,000.

“These raises are about recognition for excellence and developing morale,” Curry said. “If you don’t give them step raises, they leave.”

Shelby County Manager Alex Dudchock wrote in an email that he was glad Webb focused on “the legislative authority of the County Commission to decide budget appropriations and such.”

“Our County Commission takes their financial responsibilities very seriously, and through the Commission’s actions over the last two decades, our county has made significant advancements while being fiscally conservative,” Dudchock wrote. “The County Commission has basically practiced ‘living within our county’s financial means’ and been consistent and reasonable in their application of our resources.”