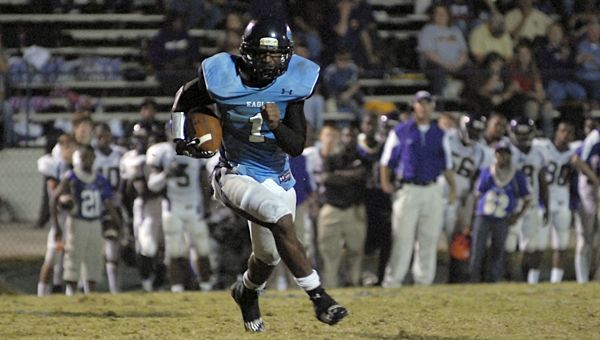 Calera's Ronnie Clark runs for a touchdown against Bibb County in the Eagles' 24-16 victory over the Choctaws on Oct. 12. (Reporter photo/Graham Carr)

CALERA – Calera (6-1) slipped by Bibb County (2-4) 24-16 on Oct. 12 behind a stout Eagles defense that pitched a shutout in the second half and a big night from junior Ronnie Clark.

“This is an enormous win for our team and our program as a whole,” Calera coach Wiley McKeller said. “We give Bibb County a lot of respect. They are a good football team.”

“We told our kids tonight, number one, don’t forget what this feels like and number two, don’t forget what it took to get to this point,” McKeller said. “It took a long road and we have worked hard to get here. Working hard between November and August is what winning these games is all about.  We won this game six months ago. I couldn’t be more proud of my team and I give them all the credit.”

Senior quarterback Zack Reneau finished 15-of-17 passing for 96 yards and a touchdown, but Clark was the Eagles leader as he finished with 189 yards on 24 carries and two touchdowns, while also having 43 yards on eight receptions

“Ronnie Clark is Ronnie Clark,” McKeller said. “He picked us up on his back tonight and got it done. We have had some games get out of hand, but we have been waiting for a game where he can pick us and do that kind of thing and he came through.”

The game started with Bibb County driving deep into Eagles’ territory before being denied on a fourth-down conversion attempt on the Eagle 14-yard line. Unfortunately for Calera, Reneau had a snap go over his head on the next play and Bibb County recovered it at the Eagles’ 3-yard line.

One play later, Bibb County scored and converted the two-point conversion to take an 8-0 lead. The score did not change the rest of the opening quarter as the teams’ swapped turnover on downs and fumbles.

The Eagles finally got on the board in the second quarter. After a Bibb County fumble at the 29-yard line, Calera closed the gap with a Clark 15-yard touchdown run. Senior kicker Stephen Ellison added the extra point to close the gap to 8-7 midway through the second quarter.

After a Bibb County punt on the next possession, Clark capped off a 70-yard Eagles drive with a 3-yard touchdown run to give the Eagles their first lead at 14-8.

The lead was short-lived as Bibb County got the ball with 2:21 left in the half and drove almost the length of the field to score with eight seconds left, taking a 16-14 lead into the half.

Calera took the opening drive of the second half deep into Choctaw territory, before having to settle for an 18-yard Ellison kick reclaiming the lead 17-16.

Calera did not relinquish that lead as the Eagles’ defense held the Bibb County offense in check the rest of the game.

“Our defense has been great all year,” McKeller said. “Our defense plays hard and they are getting better and better every week. They have a lot of heart and I know I am getting 48 minutes out of my guys every week.”

The Eagles last scoring drive took almost eight minutes off the clock and was capped off by a 7-yard touchdown pass from Reneau to junior receiver Jordan Bishop. Bishop ended the Choctaws’ hope intercepting a pass with just over a minute left to seal the Eagles victory at 24-16.