Fultondale wears down Vincent in shootout 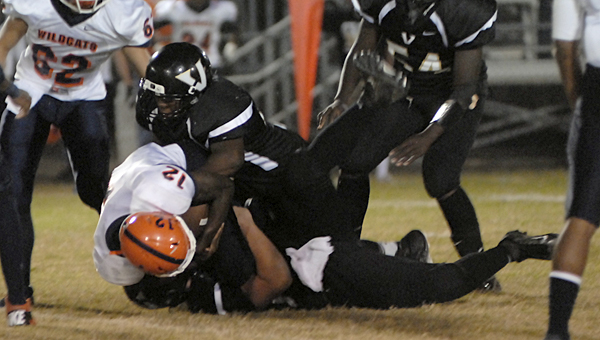 Vincent's Damauntey Johnson attempts to strip the ball from Fultondale's Khree Robinson in the first quarter of the Yellow Jackets' 59-36 loss on Oct. 11. (Reporter photo/Mickel Ponthieux)

VINCENT – The Fultondale Wildcats took advantage of an early Vincent turnover to distance themselves away from the Yellow Jackets in a 59-36 shootout win on Oct. 11.

The Wildcats’ Ardarius Stewart rushed 26 times for 222 yards and five touchdowns while throwing for 68 yards and a score to lead Fultondale to the win.

“We had turnovers against a very good football team with the best athlete in the state,” said Vincent head coach Zeb Ellison on the loss. “We couldn’t tackle him (Stewart) in the open field and not many people will.”

The Wildcats (5-2, 3-2 in Class 2A, Region 6) took a 14-8 lead late in the first quarter, then covered a Vincent fumble put themselves in scoring position once again. Stewart led his team down the field to score his second touchdown of the game for a 21-8 lead.

The Wildcats squib-kicked the ensuing kickoff and recovered the ball to gain possession once again. Fultondale drove 50 yards in eight plays with Stewart collecting his third touchdown of the game for a 28-8 advantage.

Vincent (5-2, 3-2) responded once their offense took the field two minutes into the second after leaving the field with 2:39 left in the first. The Yellow Jacket too just two plays to find the end zone when Damauntey Johnson found Jace Green for a 72-yard touchdown reception for a 28-14 Wildcats’ lead.

The Yellow Jackets’ defense picked up a stop on the next Fultondale drive, and the Vincent offense took advantage on their first play from scrimmage when Johnson connected with Green once again, this time for an 87-yard score to pull within six, 28-22 with over seven minutes remaining in the first half.

The Wildcats found their rhythm to answer the Vincent score on their next drive. Stewart capped a five-play drive with a 37-yard scamper for his fourth touchdown of the game for a 36-22 lead.

Stewart’s score was originally wiped off the board due to an illegal formation penalty. The Fultondale head coach called time out and the officials convened on the play. It was ruled that the formation was indeed legal and the flag was picked up and Stewart was awarded the touchdown.

Fultondale added a 31-yard field goal with six seconds left in the half to take a 39-22 halftime lead.

The Wildcats ran 41 plays in the first half while the Vincent offense touched the ball just 21 times.

“Our guys are in all three phases of the game and eventually they are going to wear down,” said Ellison on his defense being on the field for 41 plays in the first half. “We just have to do a better job of toughening up and getting after it.

Vincent took the opening kickoff and marched right down the field all the way to the Wildcats’ 6-yard line. Johnson found a receiver in the end zone, but Stewart stepped in front of the pass for the interception to end the Yellow Jackets’ scoring threat.

The Yellow Jackets cut into the deficit on their second drive of the third quarter. Rodney Groce flipped the field with a 74-yard run to the Fultondale 5-yard line, and then punched the ball in for a 39-28 Wildcats’ lead.

Stewart responded to the Vincent score with his fifth and final touchdown of the night to make the score 45-28 headed into the fourth quarter. Fultondale’s Dante Stanley added to the Wildcats’ lead on the first play in the final period to extend the lead to 52-28.

After throwing his second interception of the game, Johnson took advantage of excellent field position to put the Yellow Jackets on the board. Vincent gained possession after a bad snap on a Fultondale punt to get the ball at the Wildcats’ 13-yard line. Johnson rushed for 10 of the 13 yards, including a 2-yard touchdown run for a 52-36 score.

That would be as close as the Yellow Jackets would be able to get as the Wildcats’ Samuel Brown added a 2-yard touchdown with 2:37 left for the 59-36 final score.

Vincent’s only lead came early in the game when Groce scored on a 21-yard run for an 8-7 advantage. Despite trailing most of the game, Ellison saw that his team didn’t stop giving their best effort.

“They didn’t quit all night,” said the Yellow Jackets’ head coach. “We will come back ready to work to play Ohatchee.”

By GRAHAM CARR / Staff Writer PELL CITY-Vincent jumped to a 40-0 first-half lead and cruised to a 59-16 win... read more