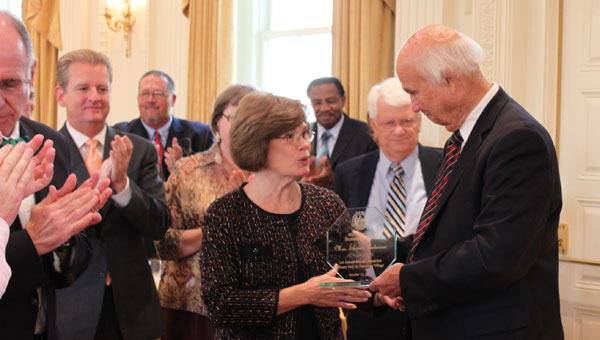 McCrory presented Lawrence with one of the four Hometown Heroes awards.

During her tenure, Anderson helped found the American Village, secure grants for city improvements, build and complete the Parnell Memorial Library, initiated Arbor Day and helped secure Montevallo as the site for the Alabama National Cemetery.

“Working in Montevallo was a very important part of my life. That gave great meaning to me,” Anderson said. “You’re the real heroes. I thank you for letting me be part of the city of Montevallo.”

Sgt. Grady Parker, another former Montevallo mayor, also received the award. Parker served in World War II and was the recipient of two Purple Hearts, the Bronze Star and a Five-Star Medal.

Parker became the assistant postmaster for 22 years in Montevallo and a “dedicated public servant” in local government for 32 years, with eight as mayor, McCrory said.

Dr. Elizabeth “Libbie” Rodgers, the final recipient, joined the Alabama College, now University of Montevallo, faculty in 1966 and retired in 1995.

“It’s been an honor to build the community together,” Rodgers said. “Thank you so much for his honor.”