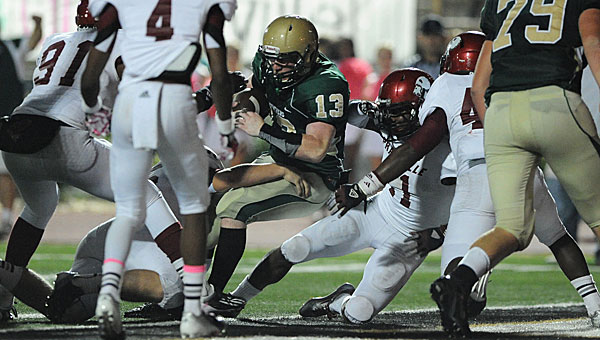 Pelham running back Eli Beall runs through the Prattville defense into the endzone for a touchdown during the Panthers’ 31-14 loss to the Lions on Oct. 12. (Reporter Photo/Jon Goering)

The Pelham Panthers were plagued by turnovers and costly penalties as they fell 31-14 on Oct. 12 to the visiting Prattville Lions.

“We had so many opportunities on offense that we left on the field,” Pelham head coach Brett Burnett said. “You can’t make that many mistakes against a good football team and expect to win.

“Our defense gutted it out in the second half and gave us some good field position,” Burnett added. “We just came up empty on offense.”

The Panthers went three-and-out on their first possession, setting up a Prattville scoring drive early in the first quarter.

On the Panthers’ next drive, an apparent 42-yard touchdown run by Jacob Nichols was called back on a chop-block penalty on the Panthers. A few plays later, the Lions recovered a Pelham fumble on the Prattville 43-yard line.

Pelham’s third drive of the game ended on a Prattville interception on the Lions’ 1-yard line. A few plays later, Prattville scored on an 82-yard touchdown pass.

The Panthers quickly tied the game at 14-all in less than five minutes on a 44-yard run by Hayes and on a 4-yard run by Beall. Both of Austin Bowen’s PATs split the uprights.

Three plays later, an apparent 9-yard touchdown run by Nichols was called back on an illegal block penalty on the Panthers.

The penalty set up a 32-yard Bowen field goal attempt, which went just right of the uprights.

Prattville ate up nearly four minutes on its next drive, scoring a touchdown on a 36-yard run.

Pelham will travel to region foe Chelsea High School on Oct. 19 to face the Hornets.