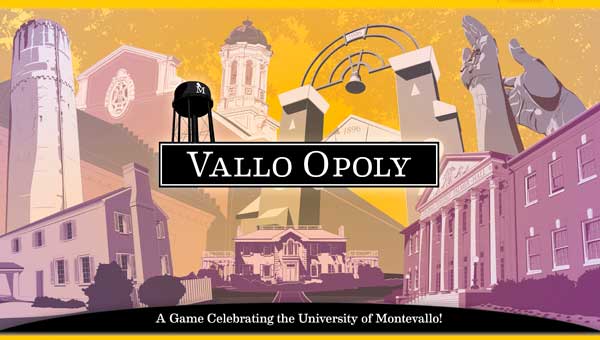 Do you think you know everything about the University of Montevallo?

Now, you can test your knowledge with Vallo Opoly, a board game, based on Monopoly, developed by students in the college’s game studies and design program, which is overseen by Dr. Cathlena Martin.

Martin and her students held a launch party for Vallo Opoly and a UM-themed dice game in Reynolds Hall as part of the Founders’ Day events on Oct. 11.

“I wanted my students to have practical experience,” she said.

“The hardest part was deciding what two parts of campus were the most important,” he said.

Once those prestige positions were selected – College Night and Palmer Hall – the students easily filled in the other board positions, which include “car fines,” “life raft debate,” and “Carmichael Hall.”

Martin said she wanted her spring workshop students to have the same practical experience as her fall class.

“I gave them the components and said, ‘Design a game around Montevallo,’” Martin said.

The components included 25 wooden cubes, a gold die, purple die and dice bag. Student Gavin Bethea said the students decided to go with the “nostalgia factor” and base the game on College Night, a UM tradition. The dice game can be played on its own or the pieces can be used with the Vallo Opoly game.

The game studies program was launched last year, and Martin said she is pleased with the effort her students made.

“Gamers really are a community,” she said. “The things we’ve done in our game studies program really have been a team effort.”

To purchase Vallo Opoly, which costs $24.99, visit Montevallo.edu/games and click on the “Vallo Opoly” link.