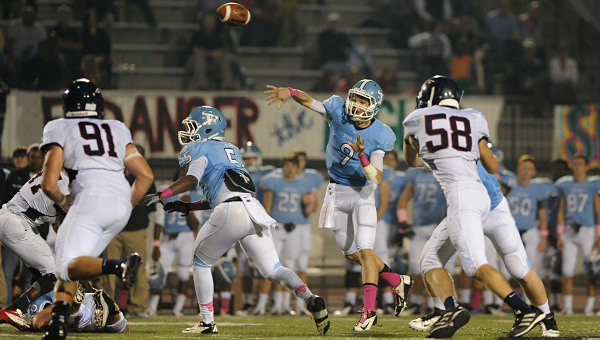 Spain Park quarterback Nick Mullens throws a pass over the top of the Oak Mountain defense during the game Oct. 12 at SPHS. (Reporter Photo/Jon Goering)

NORTH SHELBY – The Spain Park defense shutdown the Oak Mountain option attack while the Jags offense capitalized in a 34-13 win over the Eagles on Oct. 13 at Spain Park.

“We came out and focused on what we do best,” said Spain Park senior quarterback Nick Mullens. “I put the ball in the hands of my play-makers and they made plays tonight.”

Mullens completed just under 80 percent of his passes (31-of-39) while throwing for three touchdowns.

After not capitalizing on an Oak Mountain fumble to begin the game, Spain Park struck on a 24-yard touchdown run by Otis Harris for an early 7-0 lead.

Mullens threw his first touchdown pass of the game on the Jags next possession. The senior went 5-for-5 on the scoring drive including the 7-yard reception by Matt Berler for a 14-0 lead at the end of the period.

“What a pass,” said Berler on the throw by his quarterback. “I don’t know what I would do without him. He’s the best quarterback I’ve ever played with.”

The Oak Mountain defense found a way to hold the Jags out of the end zone in the second quarter while giving up two field goals by Thomas Taylor for a 20-0 Spain Park lead at the half.

While the Eagles’ defense showed what they were made of in the second quarter, the Spain Park defense made a statement through the entire contest. The Jaguars gave up just 78 yards of offense in the first half, and 186 yards through the whole game.

“The defense was outstanding,” said Jaguars’ head coach Chip Lindsey. “Defensively, this was our best effort of the year.”

The Jaguars found the end zone on their first drive of the second half when Mullens connected with Cade Hoffman for a 6-yard touchdown pass. The score ended a 11-play drive that ate up nearly three minutes of clock as Spain Park took a 27-0 advantage.

While the offense struggled to move the ball across the 50-yard line, the Oak Mountain special teams put the Eagles on the scoreboard. After a 47-yard punt by John Pizzatola was negated by a penalty, the Eagles blocked the second Pizzatola punt and Riley Fowler recovered the ball and took it into the end zone to cut the lead to 27-6 to end the third quarter.

Mullens and company added to their lead with their first drive of the fourth quarter when M.J. Brown caught a 12-yard touchdown pass for a 34-6 score.

The Eagles’ offense put together its most impressive drive of the game when they marched 80 yards in 11 plays. Harold Shador capped the drive with a 20-yard run for the 34-13 final score.

In addition to Mullens’ 285 yards in the air, Harris added 132 yards on the ground for the Jags with two touchdowns. Ben Olinger and Drake Grisham led the Spain Park receivers with 59 and 42 yards respectively.

Spain Park will travel to Stanhope Elmore in another crucial Region 4 game for the Jaguars. Oak Mountain will host Prattville.