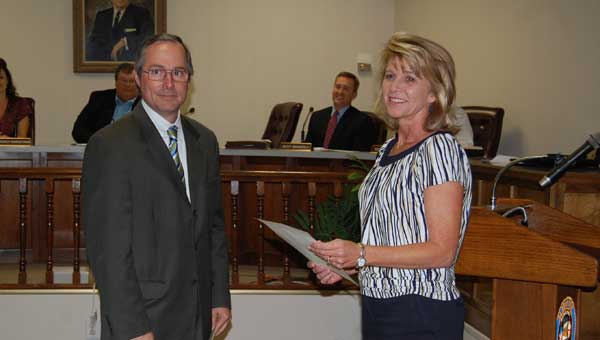 ALABASTER – The Alabaster City Council canvassed the results of the municipal run-off election during its Oct. 15 meeting.

Mayor-elect Marty Handlon was officially declared the winner during the meeting. Council President Jim McClain read the sole provisional ballot, which was cast for Handlon.

“This is a task set by the state on the council,” McClain said.

Both Frings and McClain offered parting words at the meeting, which is their last as elected officials.

Frings thanked the council members for their service and wished them luck.

“I’ve thoroughly enjoyed the last 12 years … We’ve gotten a lot done and made a good team,” he said.

Frings’ wife and daughter both thanked him for his service during the public comments session. Jennifer Frings said her husband has always been passionate about serving the community without sacrificing his family life.

Heidi Frings, 17, recalled hiding under a table as people cheered when her father was elected mayor when she was in kindergarten.

“I didn’t really understand what that meant at the time,” she said, noting she asked him to get a Chick-Fil-A and a movie theater for Alabaster.

Make a Difference Day is a nationwide service day sponsored by Points of Light and USA Weekend magazine. Community members are encouraged to volunteer throughout the community on Oct. 27.

A team works to prepare the best barbecue of the event during last year's Blues and Barbecue event. This year's... read more