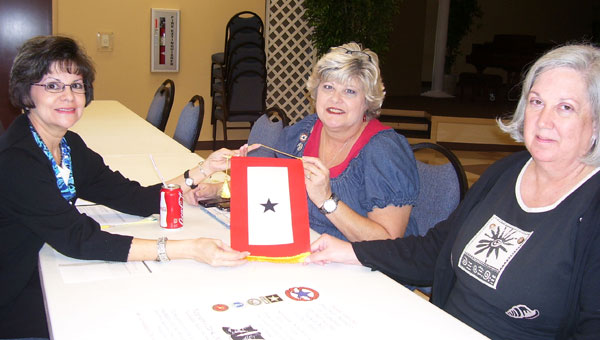 Bobbi Weidman, left, Pam Wilson, center, and Kathy Howard, talk about plans of local mothers with children in the military, to display prayer banners and burn blue candles in their windows as reminders for people to pray for our troops around the world during these troubled times. (Contributed)

“They go off our little boys and come back men,” said Bobbi Weidman, speaking of sons, who mothers send off to war.

Pam Wilson’s son, Marine Machine Gunner Larry Jr., is presently on medical leave after deployment to both Iraq and Afghanistan.

Larry Jr.’s injury is not as bad as some, she said. She is just so thankful he came back, because so many did not. “They lost 17 in his battalion, several his dear friends.

“They all come back with wounds of some kind, whether physical or emotional. But we’ll never know all they go through because they won’t talk about it.”

Although Bobbi’s son is no longer on active duty, she serves as president of the local Chapter of Blue Star Mothers of America.

“We want to let military mothers in the area know there’s support for them,” said Pam, who helped organize the Central Alabama group four years ago.

“We lost a lot of Marines this week,” Pam said. “And are asking for special prayer for our troops around the world during these troubled times.”

Saturday, Nov. 3, 9-11 a.m., Blue Star Mothers will march in combat boots at Veterans Park in Hoover, collecting donations of items like foot powder, socks, razors, snacks, fun reading material, puzzle books, etc, for the troops. Nov. 12, they will march in the Veteran’s Day parade, in Birmingham carrying posters with pictures of their sons, said Kathy Howard, whose son Griffin serves with the Marines in Okinawa.