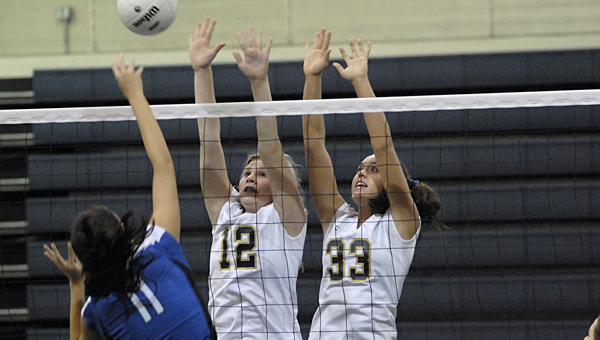 “It was a very emotional night for us,” said Briarwood head coach Tien Le. “Overall I thought we did very well staying focused with Tuscaloosa County.”

The Lions began the night with a 25-19 set one victory where they fought off a 7-1 rally by Tuscaloosa County to take a 1-0 lead in the match.

The Lions appeared ready to sweep Tuscaloosa County when they took a 10-4 lead to start the third set. The visitors rallied to even the set at 16, then went on a 9-5 run to close the game to take a 25-21 win to force a fourth set.

Briarwood regained control early in the last set when it took an 11-2 lead. Tuscaloosa County fought back with a 5-2 run, but was held to just three points the rest of the match. The Lions closed the fourth with a 12-3 rally to capture the 25-11 fourth set win for the 3-1 match victory.

“In the third set we had a focus issue to let them come back,” said Le. “Give Tuscaloosa County credit in taking advantage. I was glad to see the kids bounced back really strong in the fourth set winning 25-11.”

Briarwood will prepare for the Class 5A, Area 9 tournament where they will take on Ramsay as the No. 2 seed. Le said the win over Tuscaloosa County gives his team the push they need headed into the tournament.

“We played a very fast paced tournament this weekend,” said Le. “I think that will help prepare us for Thursday and (we have) the confidence of the win tonight. I think we are ready for it.

“We hope that we can play our best game and the result will take care of itself.”

Falcons wrap up final round at Rendleman Invitational tournament