Christmas parade moving back to 31 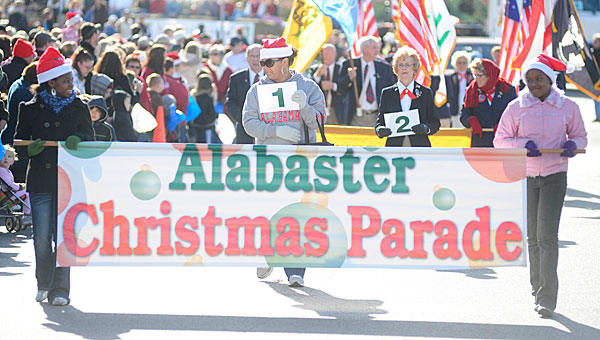 The Alabaster Christmas Parade will return to U.S. 31 this December after it was held at the Colonial Promenade last year. (File)

Alabaster officials will move the city’s annual Christmas parade back to U.S. 31 this December after the parade was held at the Colonial Promenade shopping center in 2011.

City officials announced the change of venue in early October after the city and the Promenade property manager were unable to reach an agreement to host the parade at the shopping center again this year. Last year marked the first time in decades the annual parade was not held on U.S. 31.

The parade will begin at 10 a.m. on Saturday, Dec. 1, and will run from the Ernest McCarty Ford dealership to the stop sign in front of the Belle Foods grocery store on First Street Southwest.

Alabaster City Administrator George Henry said the city considered U.S. 31 and Alabama 119 for the parade after learning the parade would not be at the Promenade, and said the city chose U.S. 31 to allow for more staging room for participants.

As in past years, the northbound side of U.S. 31 will remain open to traffic during the parade.

“I’d like to request that folks be aware and sensitive to the business owners who will likely lose a half-day of sales and-or opportunity,” Henry said.

This year’s parade theme will be “Christmas Wonderland on Main Street.” The city soon will post a parade entry form at Cityofalabaster.com/christmas-parade-dec-1-2012/sp/347.

Graham elected to AMFund board of directors