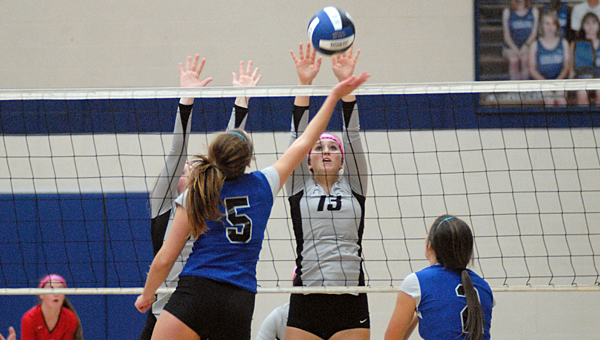 Tuesday, Oct. 16 marked the end to the 2012 Alabama High School Athletic Association volleyball season and now teams will compete for a spot in the postseason in area tournaments that begin on Thursday, Oct. 18.

Oak Mountain (6A, Area 8), Calera (4A, Area 7), Shelby County (5A, Area10) and Montevallo (3A, Area 8 ) each finished first in their respective leagues and earned the right to host area tournaments. See the schedule below for all of the area tournament schedules featuring teams from Shelby County.

Calera earned the home court advantage with a 6-0 record in area play. The Lady Eagles’ head coach Amanda Lewis said that while playing at home is a good thing, that doesn’t mean that anything is sealed up for her team.

“It’s rewarding to be able to play at home but I wouldn’t say it’s much of an advantage,” said Lewis on playing at home. “From this point on anything can happen, however, this team is developing a sense of ownership.”

While Calera is playing at home, most of the volleyball teams in Shelby County will travel for their area tournaments. Briarwood Christian will make the trip to John Carroll for the 4A, Area 9 tournament as the No. 2 seed.

“Certainly in the area tournament if you don’t win that first match your season is over,” said Briarwood Christian head coach Tien Le. “So there’s a lot of pressure there.”

Area tourmants include all the teams from each area, and the two teams that play for the area championship advance to the South Super Regional held at The Multiplex At Cramton Bowl in Montgomery on Oct. 26-27. The two teams that make the championship finals and consolation finals in the super regional advance to the Elite 8 State Tournament held at the Birmingham Metro CrossPlex on Oct. 31-Nov. 1.

Fultondale wears down Vincent in shootout

Vincent's Damauntey Johnson attempts to strip the ball from Fultondale's Khree Robinson in the first quarter of the Yellow Jackets'... read more