Briarwood takes second in 5A, Area 9 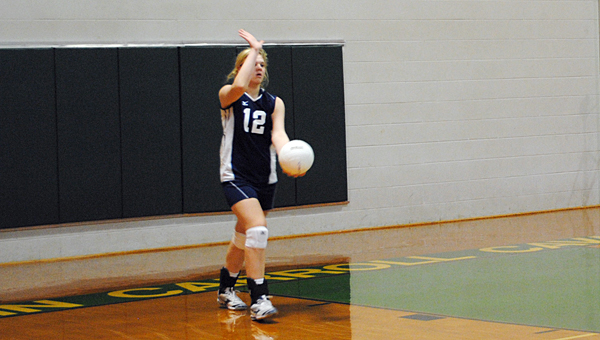 Briarwood Christian's Jennie Reese prepares to serve in a game at the Class 5A, Area 9 tournament at John Carroll on Oct. 18. (Reporter photo/Clayton Hurdle)

“Our left side hitter, Kelsi, went up and she was really aggressive,” John Carroll head coach Frances Crapet said. “Deja, our middle hitter, was in the zone. At one point in time she was seven-for-seven on kills.”

“We had a lot of team chemistry out there on the court,” Crapet said. “Our defense was really good in that game and we ran an up-tempo offense.”

“All three sets were really tight,” Briarwood head coach Tien Le said. “That was a high-pressure match because if you lose that your season’s over.”

The Lions started off in the championship with the momentum of their semifinal win and launched to a 17-10 start in the first set.

John Carroll clawed its way back into the set, and was down by three with Briarwood entering match point.

A called Briarwood point was then reversed because of a substitution error.

“Our middle went in for the libero when she should have let our DS in first,” Le said. “It was a technicality, and I think Frances would agree that we should have won the first set.”

After the disputed point was awarded to the Cavaliers, John Carroll scored the next four points to earn the game win and gain the momentum heading into set two.

Carroll jumped out to a 5-0 lead before the Lions embarked on a 7-1 run to take their first lead of the set.

The two teams fought tooth and nail until the waning moments of the set when the Cavaliers pulled away from a 21-20 lead, scoring the set’s last four points.

Carroll scored five straight in the final set to break a 5-5 tie. From then on the Cavaliers outscored Briarwood 15-7 to secure the championship title.

“The reason the third set wasn’t close was because we do have a lot of young kids,” Le said. “Our challenge is to learn to compete regardless of what the score is.”

Both Briarwood and John Carroll now advance to the 5A Super-Regionals in Huntsville where they will face off against seven other sets of area champions and runners-up in a single-elimination tournament.

“This is the first time they’ve ever had the Super-Regionals so we’re excited about it,” Crapet said. “It’s going to be a great challenge.”

Cornerstone quarterback Sterling Riether hands the ball off to running back Michael Bevard in the Chargers 39-0 loss to Restoration... read more