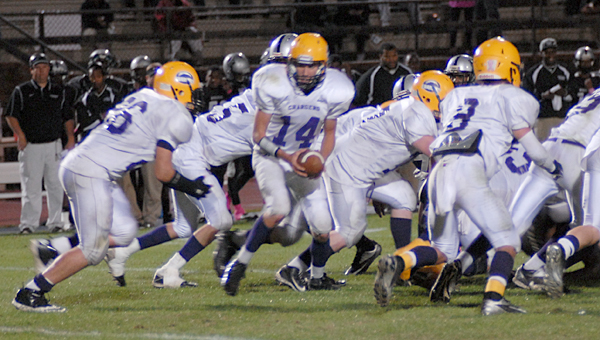 Cornerstone quarterback Sterling Riether hands the ball off to running back Michael Bevard in the Chargers 39-0 loss to Restoration Academy on Oct. 18. (Reporter photo/Graham Carr)

NORTH SHELBY – The Cornerstone Christian Chargers watched their playoff hopes vanish as Restoration Academy jumped to a 33-0 halftime lead and cruised to a 39-0 victory at Briarwood Christian School’s field.

“We have some injuries, but that is part of football,” Smith said. “Our kids played hard for us like they have all year and they are going to play hard next week when we go to Prattville.  They didn’t quit on us. I commend that- that is hard work. That means they are good men.”

Cornerstone was hurt by two of their major offensive contributors being out of the game.  Senior running back B.J. Smith was out with an injury, while senior Adrian Young also did not suit up for the Chargers.

“He is a on a recruiting visit,” Smith said about Young. “We knew it six weeks ago. He has a chance to get a scholarship there in academics.  He is very intelligent and he has a chance to do something special for the rest of his life, so we couldn’t cheat him from there.”

Cornerstone was led on offense by senior quarterback Sterling Riether. Riether was 2-4 passing for 29 yards, while also rushing for nine yards on five attempts.  Riether also had a solid night on defense with four tackles.   Junior running back Tim Warren had 16 yards on six attempts, while also snagging one catch for 25 yards.  Warren, senior Jacob Coggins and senior Will Fondren each had five tackles on defense for the Chargers.

Cornerstone would have clinched the last playoff spot in AISA Class 1A Region 1 with a win, but instead the Chargers fell into a tie with Lakeside Academy at 3-3 in the region.  The Chiefs earn the playoff berth over the Chargers because Lakeside won the head-to-head match over Cornerstone, 34-13 on Oct. 12.

With a running clock in the second quarter, Restoration added two more scores to take a 33-0 lead into the half.

The Cornerstone defense played better in the second half holding Restoration to only one score on the final play from scrimmage, but the Chargers were unable to do anything offensively.

The Alabama Frozen Tide hockey team will open the season at home on Dec. 8 at the Pelham Civic Complex... read more