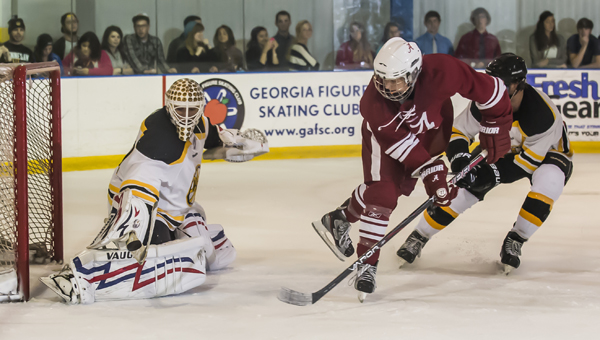 The Alabama Frozen Tide hockey team will open the season at home on Dec. 8 at the Pelham Civic Complex in Pelham. (Contributed/Steve Hampton)

Coming off a bye week, the Alabama Hockey Team travels to Kentucky, Tennessee and Vanderbilt this weekend.

The last time the Frozen Tide played, it defeated Georgia Tech 6-1 to improve its record to 1-1.  Fritz Pickard and Andre Morard scored their first career goals for the Tide. This week the Tide hopes to continue improving its record.

“We’re very excited to go play at Kentucky,” head Coach Mike Quenneville said. “We’ve never played them, but it’s supposed to be pretty crazy. We’ve heard it’s a great atmosphere to play in.” Friday’s game against Kentucky will be played at the Lexington Ice Center in Lexington, Ky. at midnight.

Saturday the Frozen Tide takes on Tennessee at the IceArium in Knoxville, Tenn. at 2 p.m., and Sunday the team will face Vanderbilt at 10:30 p.m.

“We always look forward to playing in Knoxville, and then we will turn around and play Vanderbilt.  It’s going to be three good games,” Quenneville said.  “We’re 1-1 going into these games, and we’re looking to come out with three more wins this weekend.”

For more information on the team visit www.bamahockey.net. The coaches, players, and staff would like to invite everybody to Alabama Hockey’s first home game which will take place on Sat. Dec. 8th at 7:30 p.m. at the Pelham Civic Complex in Pelham.

FROM STAFF REPORTS MONTEVALLO – In front of a sea of pink t-shirts, ribbons and socks, the University of Montevallo... read more