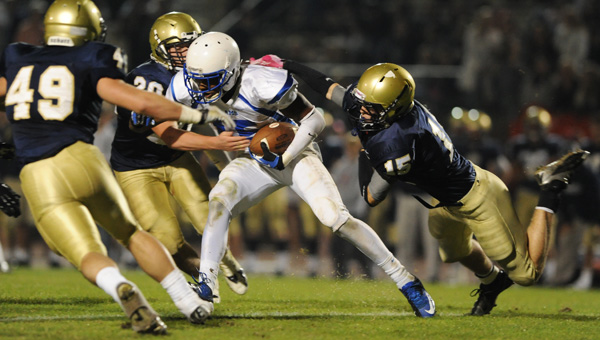 Briarwood defenders bring down a Ramsay ball carrier during the second half of the game Oct. 19 at BCS. (Reporter Photo/Jon Goering)

NORTH SHELBY-Briarwood Christian scored on four of its first five possessions and cruised to a 35-0 win over Ramsay High School.

“Real proud of our kids for battling hard and I think we are getting better,” Briarwood coach Fred Yancey said. “Defensively, it was nice to get a shutout.”

“Daniel Robert had a terrific game,” Yancey said “He has really had a terrific season for us. Tonight, it was real special to see him get a bunch of big plays.”

The Lions drove 67 yards on the opening possession of the game, capped off by a 3-yard touchdown run by senior running back Keith Shamblin.  On the Rams next possession they had a snap go over the quarterbacks head and recovered by Briarwood at the Rams 1-yard line. One play later, senior running back Regan White punched in the score, to put the Lions up 12-0 with 7:10 left in the opening quarter.  The Lions added a 30-yard field goal by senior kicker Jordan Box later in the opening quarter to take a 15-0 lead into the second quarter.

The Lions struck again late in the second quarter when Wilkins found a wide open Robert for a 22-yard score.

Wilkins found Robert again for a 3-yard touchdown pass on the last play of the third quarter, to extend the lead to 28-0.

The Lions’ last score was a 9-yard touchdown run late in the fourth quarter.

“I want to compliment Ramsay for being well coached and fighting us the whole way,” Yancey said. 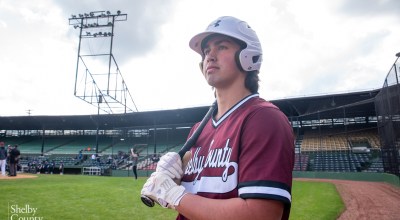