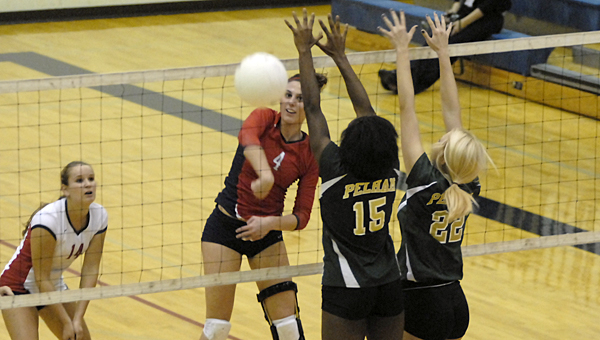 Oak Mountain senior Hannah Kowal puts down a kill in the Lady Eagles' 3-0 win over Pelham to capture the 6A, Area 8 title on Oct. 18. (Reporter photo/Mickel Ponthieux)

NORTH SHELBY – The Oak Mountain Lady Eagles won their fourth straight area title with a 3-0 sweep of Pelham in the Class 6A, Area 8 tournament at home on Oct. 18.

“Our seniors really wanted to nail that one down,” said Oak Mountain head coach Lance Woods on winning the area title. “They played a really good Spain Park team and a really good Pelham team.”

“Oak Mountain is such a good team and this is the closest we have been to them,” said Pelham head coach Perry Robinson. “I thought there were a few times we could take advantage of something, but we couldn’t do it long enough.”

The Lady Panthers scored three quick points to start the second set, but Oak Mountain answered with a 9-1 rally to capture a 9-4 early lead. Pelham kept pace led by Caitland Smith. Smith tallied five kills in a 7-4 Pelham rally to trail 22-19 late in the set, but that wasn’t enough as the Lady Eagles took a 25-21 win for a 2-0 lead in the match.

Oak Mountain jumped out to a 4-0 lead in the third set led by a pair of Madison Pierce kills and two aces by Peyton McKinley. Pelham’s Smith led Pelham back to even the set at 5 with two kills and a block.

“It meant the world to me because it was the last time for me to play on this court,” said Oak Mountain senior libero Amy Ritenour. “I was really happy that everybody came together and fought for me and the rest of the seniors.

“Pelham has always been an extremely strong team and you always have to bring your A-game against them. Tonight, they definitely brought it. We had to step up our game a lot.”

Spain Park responded with a rally to pull within seven, 23-16, but Oak Mountain took advantage of two Lady Jag errors to take the 2-0 match lead.

The Lady Eagles jumped out to a 9-2 lead to begin the third set, and closed on a 8-1 rally led by three kills by Emily Cosgrove to take the 25-13 win for the match sweep. 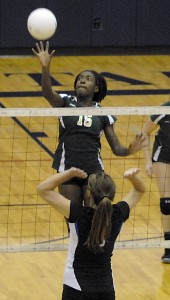 Pelham's Caitland Smith puts down one of her team-high 19 kills in the Lady Panthers' 3-0 sweep of Chelsea in the first round of the Class 6A, Area 8 tournament on Oct. 18. (Reporter photo/Mickel Ponthieux)

After splitting the regular season series with Chelsea, the Pelham Lady Panthers battled for a 3-0 sweep of the Lady Hornets at the Class 6A, Area 8 tournament at Oak Mountain High School on Oct. 18.

Pelham sealed up a spot in the Class 6A Super Regionals with the victory.

The second set saw four ties before Pelham drew away with an 11-0 rally to take a 24-16 lead. After two points, the Lady Panthers capitalized on a Chelsea error to take the 25-18 set victory for a 2-0 lead in the match.

The Lady Hornets kept pace with Pelham trailing just 5-4 early in the third set. However, Autumn Wild Hiett scored four kills in a 10-0 Lady Panther run for a 15-4 lead. Pelham closed the match with a 6-1 run capped by a Caitland Smith kill to take the 25-11 set win for the sweep.