PRATTVILLE – Stanhope Elmore fell short in the Mustangs bid for the Region 4 championship Friday night, dropping a 34-22 decision to the No. 9 Spain Park Jaguars in the two schools first meeting.

“We kept shooting ourselves in the foot with turnovers and they got the momentum,” said Mustangs coach Jeff Foshee following the game.

Ironically, it was a turnover that put the first Mustangs points of the night on the board.

Willie Ezell intercepted a Nick Mullens pass at the Stanhope Elmore 1-yard line and raced 99 yards for the go ahead score.

With the point after, the Mustangs pushed ahead 7-0.

The Jaguars though, who improved to 6-0 in Region 4, answered after capitalizing on a Mustangs fumble. 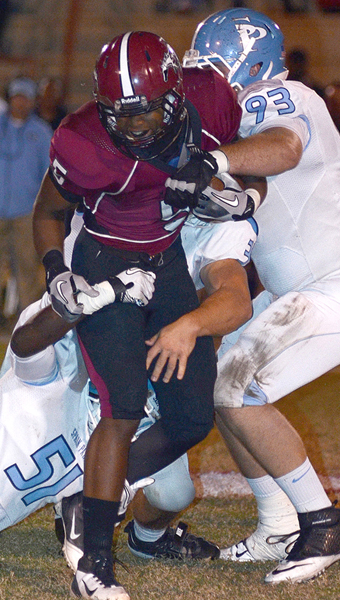 Mullens capped the two-play drive with a 5-yard pass to Cade Hoffman. The extra point was good and the game was level at 7-7.

The Mustangs squandered an early scoring opportunity in the second quarter fumbling at the end of a DeAndre Beck 40-yard scamper.

The defense, however held and the Mustangs were able to drive down and punch it in for the go-ahead score.

Kenterris Tyre raced into the end zone from 6-yards out for the touchdown.

Austin Anderson called his own number on the fake field goal and carried in for the two-point conversion, giving the Mustangs a 15-7 lead.

Mullens, however, led the Jaguars on another scoring drive, capping it with a 3-yard completion fo Michael Nelson-Brown  for the score.

Mullens looked to even the score on a two-point play, but the pass was errant and the Mustangs took a 15-13 lead into the intermission.

The second-half, however, belonged to the visiting Jaguars.

Mullens connected with Nelson-Brown midway through the third period, on a 20-yard catch-and run for the go-ahead score.

Leading 20-15, Mullens completed a 6-yard pass to Hoffman for the score with 3:28 to go in the third frame.

Spain Park scored again, this time on a 14-yard Jordan Dukes run late in the game pushing the tally to 34-15 following the successful extra point.

Stanhope Elmore, however, didn’t lay down as quarterback Brandon Wilson completed a late pass to Roger Young from 18-yards out for the score.

The extra point brought the game to it’s final tally of 34-22.

Spain Park coach Chip Lindsey said his team was excited to have won their first region championship in school history.

“It took a lot of hard work, but I could not be prouder of the kids,” Lindsey said. “This is a real fun group to coach and be around.”

Both the Jaguars and the Mustangs will host first-round games when the Class 6A playoffs start in November.