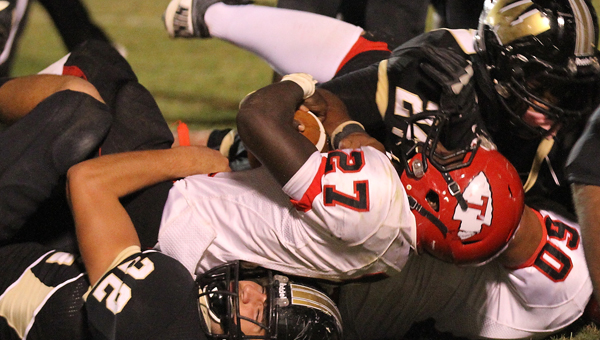 Thompson junior running back Dee Tolbert is tackled by a duo of Wetumpka defenders in the Warriors' 27-24 loss on Oct. 19. (For the Reporter/Eric Starling)

WETUMPKA – A season of opportunity has been part of the mantra all year in the Thompson Warrior locker room. Seizing those opportunities has not come easy for the Warriors as they again struggled to hold on to the lead against Wetumpka, falling 27-24.

The evening started with a lot of promise as the Warriors seemed to be able to move the ball at will on the first drive. Turnovers have plagued the Warriors all season and tonight would be no exception. Their first drive would end with a fumble in the red zone, and their second drive resulted in a pick six for the Indians.

The Warriors found themselves down 14-0 before they were able to get their first score. A David Buckelew field goal from 31 yards out put the Warriors on the board as the first quarter was nearing the end.

Special teams was key to Thompson staying in the contest. A booming punt by Buckelew was mishandled by the Indians and recovered by the Warriors at the Wetumpka 18-yard line. With a first and goal from the 6, the snap sailed over Dee Tolbert’s head as he was in the wildcat formation. Tolbert recovered and scrambled right to hit a wide open Trey Matherson in the end zone. A Buckelew extra point made it 14-10 Wetumpka.

After recovering their own fumble and facing a fourth and twenty-five, the Indians were forced to punt from the end zone.

Thompson would start the drive at the Wetumpka 30-yard line and four plays later Matherson would connect with Eric Reeves for a 15-yard touchdown score. Buckelew hit the extra point giving Thompson a 17-14 lead at the half.

“When you have two punters like Buckelew and Hunter Black, they can really flip the field in your favor,” stated Coach Michael Montgomery. “Our character showed as we turned the score around to end the first half.”

Another big play by special teams on punt coverage in the third quarter would set Thompson up at the Indians 18-yard line. A 16-yard pass from Tolbert to Jesse Handlon came just inches short of a touchdown, but Tolbert would punch it in on the very next play. Another Buckelew extra point and it was 24-14 Warriors.

Big plays from scrimmage by the Wetumpka offense in the fourth quarter would go unanswered by the Warriors.  Charlie Crenshaw would scamper 64 yards for an Indians touchdown early in the quarter and two drives later O.J. Jackson would carry the ball 74 yards for the decisive score.

The Warriors will return home next week to face Oak Mountain.