Eagles one step closer to playoffs 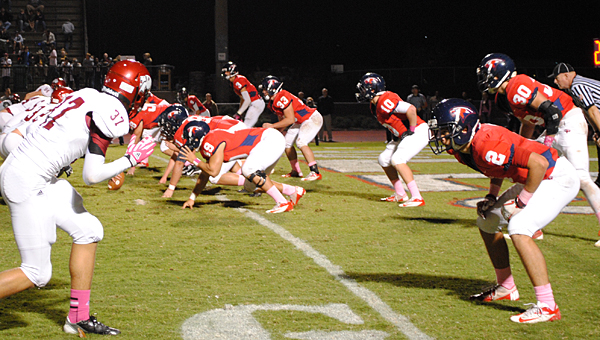 The Oak Mountain defense lines up to protect their own end zone in the Eagles' 21-17 victory over Prattville on Oct. 19. (Reporter photo/Clayton Hurdle)

NORTH SHELBY – The Oak Mountain Eagles put themselves in position for a spot in the AHSAA Class 6A playoffs with a 21-17 home win over the Prattville Lions.

“If you had told me we would turn the ball over as many times as we did and still come out in front, I’d have said no way,” first-year Eagle coach Cris Bell said. “I think we played a perfect game except for the turnovers.”

Jake Adams scored two rushing touchdowns in the first half for Oak Mountain, which bookended two Stanley Mays scores for the Lions.

“Our offensive line played their best game of the season,” Adams said. “It could have been me, Scott Hester, Josh Gaines or anyone else scoring those touchdowns, the line played well all game.”

The Eagles got on the board first with a one-yard Adams touchdown with 52 seconds to play in the first quarter.

The Lions answered on their ensuing drive with a one-yard Mays run at the second quarter’s 10:18 mark.

On the Eagles’ very next play, a failed handoff exchange from Adams to Josh Gaines caused a Prattville-recovered fumble.

The fumble would set up a 41-yard touchdown pass from Whitlow to Mays.  The extra point put the Lions up 14-7 with 5:16 to play in the half.

After an Oak Mountain punt, Whitlow threw his second interception of the game.  The John Michael Miller pick set up another yard-long Adams touchdown as time expired in the second quarter.

The score at halftime was 14-14 and it remained so for most of the third quarter.

The Gaines fumble set up a 48-yard Austin MacGinnis field goal with 3:43 to play in the quarter.

Prattville took its 17-14 lead into the fourth quarter.  Yet another Adams fumble gave the Lions a chance to extend the lead.

The Lions drove deep into Oak Mountain territory when, facing fourth-and-short, a misfired snap ended up 29 yards backfield for a turnover on downs.

“It was massive,” Bell said. “We get a stop, that’s great. But not only did we do that, we gained 30 yards of field position.”

The resulting 46-yard Oak Mountain drive ended with a one-yard Scott Hester scoring run with 4:49 to play. Miller’s extra point made the score 21-17.

The Eagles needed a defensive stop on Prattville’s next drive to ensure the win.  Alvendia provided just that, breaking through the line on a Prattville fourth-and-one to prevent Mays from advancing with just two minutes to play in the game.

“Our defensive is phenomenal; they’re the best in the state,” Adams said. “We just continue to ride on them every week.”

With the win, Oak Mountain (6-2, 4-2 Class 6A Region 4) moved into second place tie in the region behind Spain Park.  The Eagles will travel to Thompson for their last region game.

Meanwhile, Prattville (3-4, 3-3) will host Chelsea next week to wrap up regional play.