Birds do the teaching in OMHS class 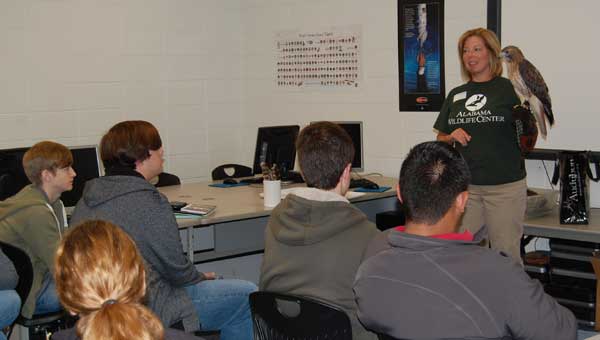 Representatives from the Alabama Wildlife Center brought two falcons to Paula Hughes’ engineering classes for a program about winged flight.

Jay Eubanks, the AWC’s director of education and outreach, began the lesson with a discussion of feathers and airfoil, which is the basic shape of a wing.

Eubanks and volunteer Sandra Allinson handed out different bird wings during the program.

Eubanks said owl feathers have soft edges, which allows them to fly silently and helps when hunting prey at night.

Eubanks gave several examples of how the aerospace industry has adapted ideas from natural flight.

For example, the Peregrine Falcon has small protrusions, known as combs, which allow the bird to breathe by breaking the air pressure when it flies or dives.

“At high speed you have to have a comb,” he said. “Peregrin falcons did that long before the first airlines did.”

Eubanks and Allinson brought two of the AWC’s education birds to the program – Ireland, a Red-Tailed Hawk, and Natchez, a Mississippi Kite, which are both raptors.

Eubanks said scientists believe the earliest raptors – dinosaurs – also had feathers, although they were probably originally used for insulation, not flight.

“The evolution for flight took place later,” he said.

Eubanks also discussed how birds use thermals – columns of rising air – to soar for long distances.

“These guys can cover thousands of miles that way while expanding very little energy because they’re not flapping. They’re just gliding,” he said.

Hughes said groups of students will choose a bird to research for an upcoming project. The groups are responsible for creating a 3-D model of a wing of their chosen bird, as well as studying the different types of flight – take off, gliding, flapping and landing.

OMHS’ aerospace engineering program was launched this year. Over the course of the year, the students will study engineering design and drawing, natural flight, propulsion, Bernoulli’s principle and gliders.