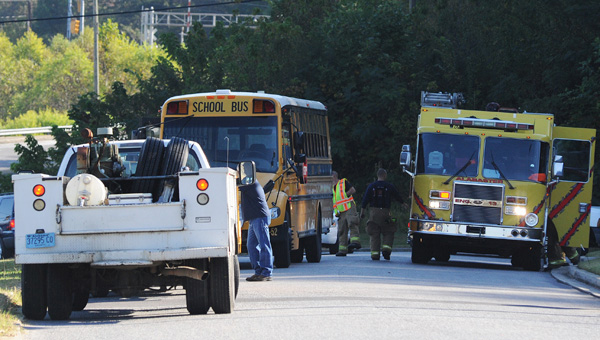 Responders work a scene in Alabaster where two school buses collided on the morning of Oct. 24 near the Alabaster Burger King restaurant. (Reporter Photo/Jon Goering)

Seven students were transported to Shelby Baptist Medical Center when a school bus rear-ended another school bus near the Alabaster Burger King restaurant on Alabama 119 on Oct. 24.

The wreck happened at about 8:20 a.m. shortly after the buses, which were transporting fifth-grade students from Thompson Intermediate School to a field trip to DeSoto Caverns, left the school, said Shelby County Schools spokeswoman Cindy Warner.

Alabaster Police Chief Curtis Rigney said the lead bus was stopping at a traffic light when the second bus collided with it.

Warner said no injuries “appeared to be major,” but said Alabaster police and firefighters evaluated students on the scene. Some students were transported to the hospital “to be checked out,” Warner said at about 9:10 a.m.

Rigney said none of the kids suffered life-threatening injuries, but some were complaining of neck pain and were taken to the hospital as a precaution.

The students on the bus who were not injured were transported back to Thompson Intermediate, Warner said.

FROM STAFF REPORTS AUGUSTA, Ga. – The University of Montevallo volleyball team got off to a fast start and held... read more