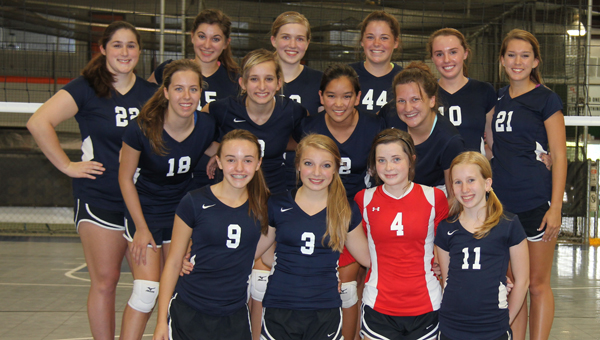 The Evangel Christian volleyball team ended a spectacular season on a high note by winning the Alabama Christian Sports Conference championship on Oct. 20.

McGriff was named the ACSC Tournament MVP. The Evangel Christian junior totaled 12 kills, 23 assists, 17 aces and 13 digs to lead the Lightning to the title.

The Lightning advanced to the finals with a 25-13, 25-13 win over Evangel Family Christian in the semifinals. McGriff posted a team-high 13 assists with four aces for Evangel while Foster led with eight digs. Ragland had five kills.

Evangel opened play in the ACSC tournament with a 2-0 win over The Rock. McGriff had four kills, six assists and nine aces in the Lightning sweep. Ragland led the way with five kills and seven digs.

McGriff and Ragland were named to the All-Conference First Team and to the All-Tournament team. Anna Byers and Erin Morris earned second team all-conference honors.

The Lightning varsity team was not the only one to bring home hardware. The Evangel junior varsity team won the ACSC JV Championship with a 25-13, 25-13 win over Evangel Family Christian.

Jaguars move up to No. 8 in ASWA poll

By MICKEL PONTHIEUX / Sports Reporter The Spain Park Jaguars moved up one spot to No. 8 in Class 6A... read more