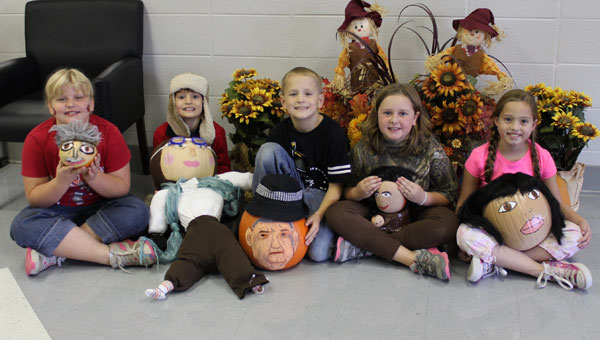 Third grade teachers Kristal Lawrence and Lisa Carden instructed their 36 third graders to choose biographies for their October book club. After reading the books, the students dressed up pumpkins at home to represent each student’s person of choice. Finally, students showed off their creations and presented on their biographies to both classes.

“I’m proud they got up in front of everybody,” she said.

Third grader Hannah Jackson chose to learn about Sacagawea because her grandmother is interested in the historical character. Jackson’s pumpkin included a “baby” pumpkin to represent how Sacagawea died while having a baby.

Christian Headley read about Amelia Earhart, and gave his pumpkin flight goggles and a full body.

Laci Kelley said she found Pocahontas “very interesting” when her dad told her the “real story” about how at 18, she was baptized and became a Christian.

Landen Lawrence, Kristal Lawrence’s son, learned that he shares his Sept. 11 birthday with Paul “Bear” Bryant. His pumpkin was complete with a Bear Bryant portrait and houndstooth fedora.

“I picked him because I like scientists,” she said, holding up her painted pumpkin with a large tuft of hair.

The students also created posters in class full of facts and pictures of their chosen historical figures.

“We tried to have them pick someone they didn’t know much about,” Lawrence said. “We wanted them to learn new information rather than picking someone they already knew about.”

Creek View Elementary School students join the Boosterthon Fun Run All-Star in getting the crowd pumped up during a pep... read more