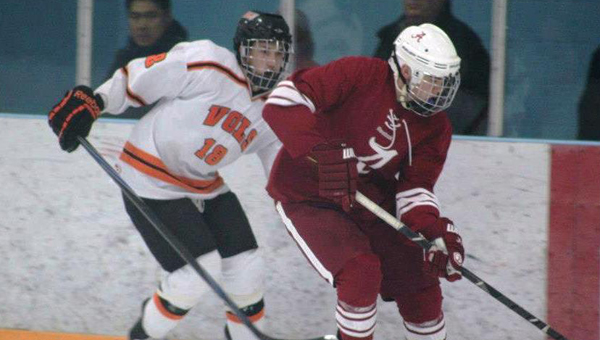 Alabama Hockey picked up two wins this past weekend as they traveled to three different universities in less than 36 hours.  The Frozen Tide battled back and forth with Kentucky in its weekend opener, eventually losing 6-5. The Tide finished the weekend strong, though, with a win over Tennessee 12-2 and a win over Vanderbilt 4-3.

Sophomore Kenny Jannsen had four goals on the weekend along with senior captain Matt Mayes who had three goals and three assists.

“I felt like we came out and competed,” said Mayes. “Tennessee is a rival for us and I felt like that game was our best effort as a team.”

This next week will be a test as the Tide heads up to Lansing, Mich. to play three good teams at the Munn Ice Arena.  The tide will play Grand Valley State at 4 p.m. EST Friday.  Saturday the team will face off against a tough Michigan State team at 7 p.m. EST.  Finally, the Tide will play Davenport, who finished second at last year’s national tournament, at 9 a.m. EST Sunday.

“This weekend will be a strong test,” Mayes said. “With the long bus ride and three games in three days it will show where we are as a team and what we need to improve on. I’m looking forward seeing how we compete against some of the best teams we will play all year.”