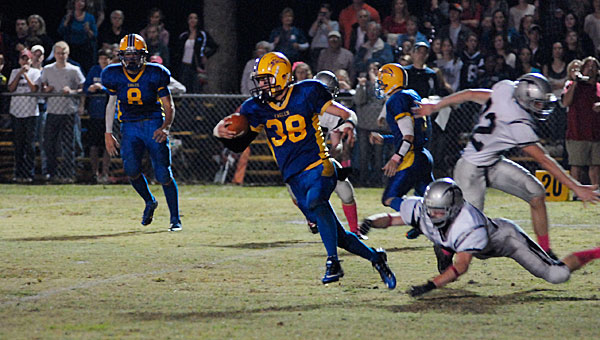 Hope’s Charles Streets has a long kickoff return in the Eagles’ 34-32 loss to Evangel on Oct. 26 during the ACSC championship game. (Reporter Photo/Graham Carr)

Evangel coach Del Clayton said his team used its 24-14 loss to Hope on Sept. 14 as motivation.

“We played them four or five weeks ago and lost to them,” Clayton said. “I did not think we played our best ball game. That wasn’t taking anything away from them. We knew they were a great football team. We just told our guys to play 48 minutes to never give up and to never quit fighting and they did that tonight.”

Andrew Thompson led the Lightning with 7-of-20 passing for 116 yards and two touchdowns while David Baggett had 120 yards  and a touchdown on 21 carries. Caleb Hoge had three receptions for 102 yards.

“Andrew Thompson did a great job tonight,” Clayton said. “We actually did a hurry up and put some of the play calling in his hands tonight.”

Evangel struck first when Thompson found Sullivan for a 1-yard touchdown pass on the Lightning’s second drive of the game. Dru Bell added the extra point.

The scoring picked up in the second quarter when Hope got on the board when junior quarterback Dillon Thompson found senior receiver Charles Streets for a long touchdown pass.

After Sullivan added another touchdown for Evangel, Hope scored right before the half on a long touchdown pass from Thompson to freshman receiver Fuqua Cannon. The teams went into the half with Evangel leading 13-12.

Hope took its first lead of the game with 8:33 left in the third quarter on a Thompson 5-yard touchdown pass.

Evangel answered the Eagle score with a Baggett touchdown run to take a 21-20 lead with 5:55 left in the third.

Hope kept the back-and-forth seesaw game going with a 3-yard touchdown run by Thompson, but the Eagles failed on the two-point and only lead 26-21 heading into the fourth quarter.

Evangel grabbed the lead back with an 18-yard touchdown pass from Thompson to junior receiver Josh Letson.

Hope snatched the lead back two and half minutes later when Streets ran in a two-yard touchdown run.

Evangel took over at midfield after a good return by the Lightning special teams. The drive was helped by Sullivan, who had two big runs on two consecutive third downs and he capped off the drive with the go-ahead 3-yard touchdown run.

The Evangel defense held the Hope offense in check on the Eagles’ final three drives to claim the championship.

Hope Christian coach Tony Nafe said he was disappointed in the outcome of the game, but was proud of the way his team fought the whole game.

“We faced a good quality Evangel team and they played us tough the first time we played them and we knew they’d be ready for us,” Nafe said. “I felt like we left everything on the field and when you end up losing 34-32, I don’t know what else you could ask for.”