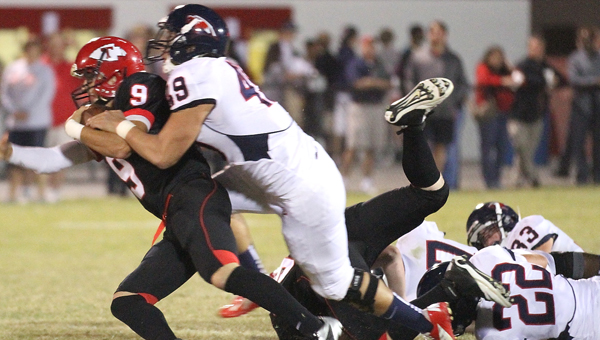 The Warriors returned home to Larry Simmons Stadium to face the Eagles from Oak Mountain. Thompson fought tough in the first half keeping the score close, but in the end the Eagles prevailed 31-10.

After a scoreless first quarter, Thompson began a drive on the Oak Mountain 46-yard line thanks to a strong stand by the Warrior defense. Quarterback Trey Matherson spread the ball around the field hitting Eric Reeves and Dee Tolbert for nice gains, while Tolbert and Devonte Smith gained nice yardage on the ground. The Warriors moved the ball to the one yard line, but a strong defensive push by the Eagles forced Thompson to settle for a David Buckelew field goal making it 3-0.

Oak Mountain would score on their very next drive moving the ball 64 yards for the go ahead score. Quarterback Jake Adams scored on the 1-yard plunge making it 7-3 Oak Mountain after the extra point was added.

The Eagles intercepted a Thompson pass with 39 seconds remaining in the first half. Four plays later and aided by a defensive holding penalty, the Eagles would extend their lead to eleven, 14-3.

Fumbles by the Warriors led to ten more points for the Eagles in the third quarter as they pushed the scored to 24-3.

Tolbert busted out for a 15-yard gain on the first series of the fourth quarter, and Matherson called his own number scrambling to mid-field. After an 11-yard pass to Reeves, Tolbert to a Matherson hand off and went right up the middle for a 24-yard touchdown run. A Buckelew kick made it 24-10 Oak Mountain.

Oak Mountain added their final score with three minutes remaining in the game to finish 31-10.

“This week we as coaches will speak word into these young men as they face their final challenge of the season next week. God gives meaning and purpose to each of us, and that has to be what we leave them with when it is all done,” said Montgomery.