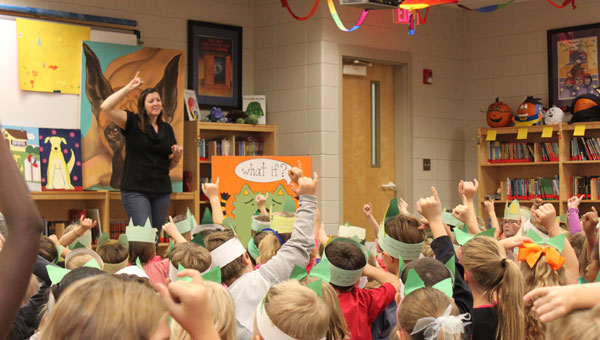 Nelson-Schmidt told her story and read to the kids in the Chelsea Park library Oct. 26.

The students gasped, then broke into applause when Nelson-Schmidt revealed her hand-painted portrait of a Great Dane, which is “like Scooby Doo or Marmaduke,” she told the kids. The painting is part of the Atlanta author’s story of how she discovered a “magical, amazing life” when she decided to become a fulltime author and illustrator, something she had dreamed of doing since she was a child.

Nelson-Schmidt was originally a graphic designer, then became a pet portrait artist when she began painting, a passion she discovered in elementary school. She then began writing and illustrating children’s books. After three years of trying, a publishing company decided to print her first books, “Cat, Cat” and “Dog, Dog,” which teach small children about adjectives.

“Somebody told me ‘no’ to my dream for three years. I don’t believe in the word ‘impossible’ anymore,” she said.

The “Whatif Monster,” Nelson-Schmidt explained, is a “little green monster whispering all the things that could go wrong.”

Chelsea Park student Baylor Wall said people shouldn’t listen to the “Whatif Monster.” When asked what they should listen to instead, Wall enthusiastically replied, “Your heart!”

Nelson-Schmidt asked the students to raise their pinkies and make a promise to follow their hearts and dreams “no matter what.”

“It connects with the kids on such a deeper level,” Nelson-Schmidt said of her book. “They’re starting to know who they are at their age. I want them to know they can have a dream life, but it’s not just something you wish for and hope for, you have to work for it.”

Nelson-Schmidt said she has spoken to students as old as eighth grade, and she receives emails saying she has changed lives and inspired them.

“My main message is to believe in yourself,” she said.

Nelson-Schmidt visited 10 schools in the Birmingham area over the past week, including Chelsea Park, Chelsea Intermediate, Mt Laurel and Our Lady of the Valley. The author will speak to more than 100,000 children this year.

Nelson-Schmidt will have another book published, “Bob is a Unicorn,” in June 2013 by USBorne Books and Moore and Kane/Miller Book Publishers. For more information, visit Whatifmonsters.com.