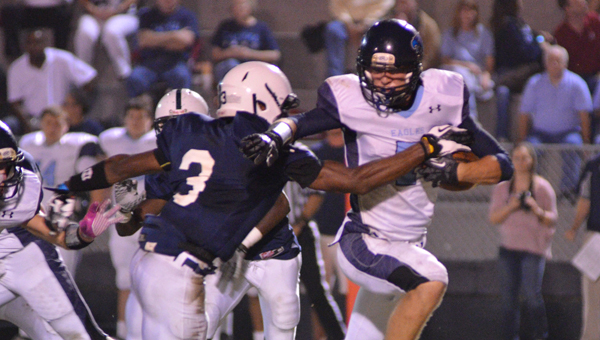 Calera junior receiver Jordan Bishop breaks away from a Jemison defender in the Eagles' 35-14 victory on Oct. 26. (For the Reporter/Stephen Dawkins)

JEMISON – The Calera Eagles sealed up a home game in the Class 4A playoffs with a 35-14 win over rival Jemison on Oct. 26.

Friday’s game began as a defensive slugfest. Neither team so much as threatened to score until a quick strike by Calera. Ronnie Clark’s 45-yard pass to Jordan Bishop, and then Stephen Ellison’s point-after gave the Eagles (8-1 overall, 6-1 in region play) a 7-0 lead with 5:19 remaning in the first half.

Jemison (5-4, 4-3) took possession with its best field position of the game so far with about a minute a half to go before halftime. But after starting on the Calera 27-yard line, the Panthers went backwards 16 yards on two plays, and the half came to a close with the score still 7-0.

The Panthers received the kickoff to begin the second half and drove 54 yards to the Calera 14-yard line, but on a second down and short play, the shotgun snap was fumbled and Calera recovered.

Jemison’s defense held its ground on the ensuing possession, though, stopping Calera’s Sam Adams on a third and short run.

On a fourth and 6 from Calera’s 35-yard line, Jemison quarterback Jacob Hatch–who didn’t play in the first half as the Panthers went exclusively from their Wildcat formation with Kevin King taking the snap–tossed the ball into the end zone, and the officials said Jemison’s Randy Satterfield came down with possession of a contested pass.

Roberto Abarca’s point-after tied the score at 7 with 1:33 left in the third quarter, but Calera answered right back with an 82-yard pass from Zack Reneau to Bishop.

The fourth quarter wasn’t kind to host Jemison, as Calera scored on a 22-yard run by Shakeith Tyes, a 7-yard run by Reneau and a 50-yard run by Clark.

Mixed in was a 14-yard pass from Hatch to Kortlin Zeigler for a Jemison score.

Hatch completed eight passes in 14 attempts for 120 yards. King carried the football 14 times for 72 yards, and Satterfield had three catches for 60 yards.

Bishop had seven catches for 176 yards for Calera. Sheldon Nixon tallied 19 tackles, six of which were for a loss, including four sacks.