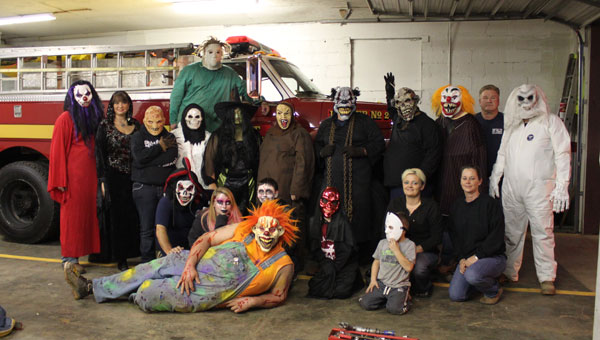 Dry Valley Fire Department and West Shelby Fire and Rescue teamed up for Dogwood Disturbia, a haunted house at West Shelby Fire Station No. 1 throughout October. The final night will be Oct. 31. (Reporter photo/Christine Boatwright)

MONTEVALLO – Instead of strapping on fire helmets and stepping into boots, the firefighters pulled on scary clown masks and witches wigs for Dogwood Disturbia, a haunted house at West Shelby Fire and Rescue.

Dry Valley Fire Department and West Shelby Fire and Rescue partnered to put on the haunted house every weekend throughout October, with the finale on Halloween night.

During two of the haunted houses, the fire departments were called to assist in a house fire and car wreck.

“We had zombies getting into their fire gear,” Graham said, laughing. “It’s a chance for big boys to act like little boys.”

“It’s got to be in your blood to do it for nothing,” Dry Valley firefighter Steve Lawley said about volunteer firefighting. “You get a pat on the back every once in awhile, and that’s enough for me.”

Graham said the firefighters and those participating will adjust the level of scariness depending on the group, especially for small children.

The haunted house begins with a witch telling a story of a man buried beneath the firehouse.

“We had two girls run straight through the fence (toward the end of the haunted house). They left the guide and were gone,” Graham said, laughing.

Admission to the haunted house costs $10, the hayride is $8 and cost $15 together.

West Shelby Fire Station No. 1 is located off Shelby County 22 in Montevallo. Trick or treating will begin Oct. 31 at 6:30 p.m., and the haunted house will be open until about midnight.