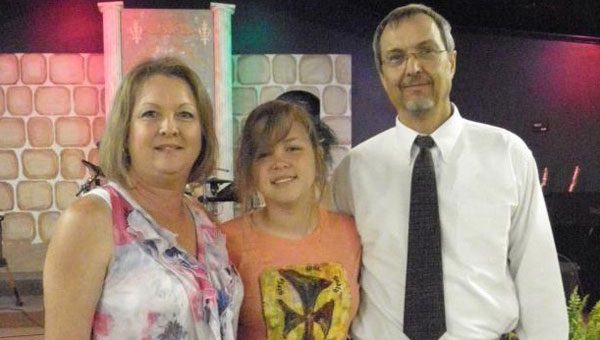 Concord Baptist Church and Calera Civitan Club are sponsoring a benefit concert Nov. 11 at 6 p.m. at Concord Baptist for Calera resident Rick Rogers. Rick is hospitalized at UAB awaiting a heart transplant and has been unable to work since May. Funds raised will be applied directly to health care costs.

Ricks’s genetic disease began 12 years ago, his wife, Ellen, said. “Rick’s heart began racing out of control and he was diagnosed with nonischemic cardiomyophathy. His doctors tried cardiac mapping, but that didn’t work, so they implanted a defibrillator. He did fine until a year and a half ago.”

Rick was admitted to UAB on Sept. 6 for removal of excess body fluid and cardiac catheterization. He suffered complications during the cath procedure and was placed in the MICU. Nine days later, he had emergency open-heart surgery to insert a Left Ventricular Assist Device to save his life. Sept. 19, he was intubated and placed on a ventilator for 15 days.

Rick is steadily improving and regaining his strength for further surgeries. Family and friends have been by his side and taking care of his family.

“Rick’s sister, Tammy, and brother, Rod, have been by his side every day,” Ellen said. “I don’t know what we would have done without help from friends, Concord and SEPCO. God answered prayers for Rick through the doctors and medicine. He wouldn’t be here now without the touch of God on him.”

Rick and Ellen moved from Greenwood to Calera 14 years ago with their daughter Bethany, a 10th grader at Calera High School. Rick is employed with SEPCO and plays guitar in Concord Baptist Church’s praise band. Ellen is employed with Walmart.

An account, Rick’s Heart Fund, has been set up at America’s First Federal Credit Union. Donations can be made at any branch. Make checks payable to Rick Rogers Heart Fund/Tammy Martin. Donations can also be mailed to 476 Daventry Circle, Calera, AL 35040.

Children pink out to raise awareness of breast cancer