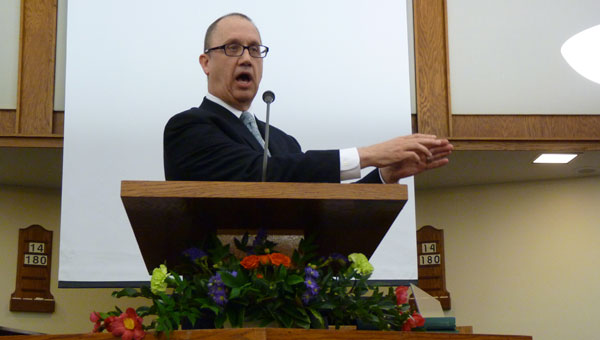 Richard Holzapfel speaks during "What Mormons Believe" at the Hoover chapel of the Church of Jesus Christ of Latter-day Saints. (Reporter photo/Amy Jones)

INDIAN SPRINGS — A local official from the Church of Jesus Christ of Latter-day Saints spoke about the Mormon faith at an event designed to answer any question about the faith — no matter how controversial.

Richard Holzapfel, the president of the Birmingham mission, took questions from the audience during the event, held at the Hoover chapel of the Church of Jesus Christ of Latter-day Saints Oct. 28. In the Mormon church, a mission is a geographic area to which church missionaries are assigned.

In response to a question about how the Mormon church has continued to grow, Holzapfel said as church members settled across the globe, they spread their teachings to friends and neighbors.

In two decades, the church has grown from 7 million members worldwide to 15 million. The church actually must control its growth because it has been so rapid, Holzapfel said.

“We are moving forward,” said Holzapfel, who added that the church has around 55,500 missionaries serving today worldwide.

Another audience member asked if church members took communion, to which Holzapfel gave a resounding yes.

After a question about how the church chooses its leaders, Holzapfel said bishops, or pastors, will be older “with life experience” and will be male. However, women can hold other leadership positions within the church, he said.

A woman asked, “Who are the Latter-day Saints?”

Holzapfel said Latter-day Saints are those who have accepted Christ, been baptized and are attempting to live their lives by God’s word.

“Saints are people who are trying to become holy through God,” he said.

In response to a question about the origins of the Book of Mormon, Holzapfel explained the book is a history of a family, including the prophet Jeremiah. According to Mormon teachings, in the 1820s, an angel appeared to Joseph Smith and told him where a record of ancient history was buried in the United States. Smith eventually uncovered the record, which now is the text of the Book of Mormon.

“As Latter-day Saints, we believe it is possible that one day other records will come forth,” Holzapfel said.

He also spoke about the current political climate, including U.S. presidential candidate Mitt Romney, a member of the Mormon faith. He said while Mormon leaders encourage congregants to vote and be involved politically, they will never endorse any particular candidate.

“In a day when Christianity is under attack — literally under attack — in some parts of the world, it’s important for us in the United States not to fight among ourselves,” Holzapfel said. “We must show compassion and come together.”

Family to compete on game show