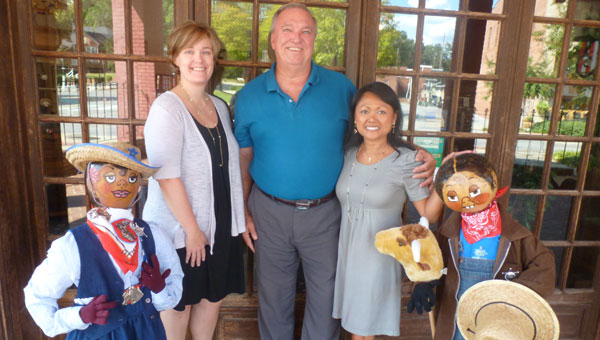 You are cordially invited to Columbiana’s mayoral and City Council Inauguration Ceremony on Monday, Nov. 5, at 6 p.m. on Main Street followed by a celebration for all.

“I am so proud,” said wife Ann Handley. “Stancil has worked so hard. He will be an energetic and hardworking mayor. I look forward to learning and working to help my husband.”

“I wanted the inauguration to be a social event for the town,” said Handley who planned the event. “All residents are encouraged to come, visit, socialize, dance and have fun. I want everyone to mix and mingle and have a good time in Columbiana.”

Helen Dean is Handley’s assistant and worked with him throughout his campaign as well in his professional business.

“Columbiana has just elected an honest, dependable, ambitious, hardworking, strong mayor,” said Dean. “Even before elected mayor, Dr. Stancil worked each day for Columbiana to promote the future growth of the city he lives in and loves. There are many instances I have seen working for Dr. Stancil, in his office and on the campaign trail, that has convinced me of that and of his character qualities first hand. Columbiana will be represented by someone who is determined to work hard each day to bring new opportunities to Columbiana and to let it shine for what already makes it great.”