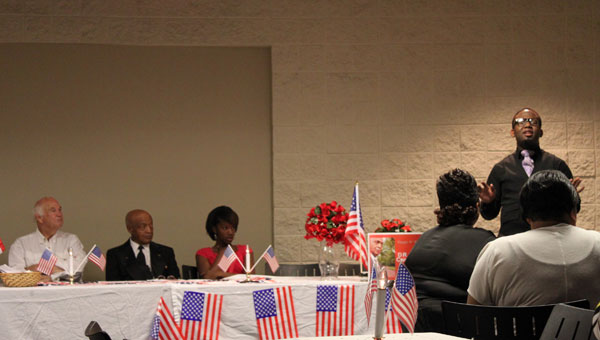 MONTEVALLO – One of Montevallo’s longtime residents celebrated his 81st birthday with a program at Parnell Memorial Library Oct. 26.

Dr. Earl Cunningham is a “man who deserves to be honored,” said Denise Jones, who served as the mistress of ceremonies for the celebration. Cunningham and his friends hold the party each year.

In addition to the community-wide birthday party every year, Cunningham, a former Shelby County commissioner, donates money for University of Montevallo scholarships. Three seniors from Shelby, Chilton and Bibb counties in the university’s Upward Bound program qualify for the $500 scholarships. The recipients have a 100 percent graduation rate.

“It’s been such a great pleasure to have been his friend and see all that he’s done,” McCrory said. “He’s just driven to do good things.”

Justin Hamilton, a May 2010 graduate of the University of Montevallo, directed UM Gospel Choir members through special music during the party.

Cunningham responded with his typical thumbs up and clasped hands.

Friends and relatives spoke of Cunningham’s contributions to the Montevallo community.

Cunningham earned a Bronze Star after serving in Vietnam in the U.S. Army, according to Luke Marshall.

“He helped save quite a number of men assigned to him in combat,” Marshall said. “He’s always so even-handed and easy to deal with and talk with.”

“I have always seen him be a man of the community,” she said.

All proceeds from the event will benefit the Dr. Earl Cunningham Scholarship Fund.

By MICKEL PONTHIEUX / Sports Reporter MONTGOMERY – The Calera Lady Eagles volleyball team had their season come to an... read more