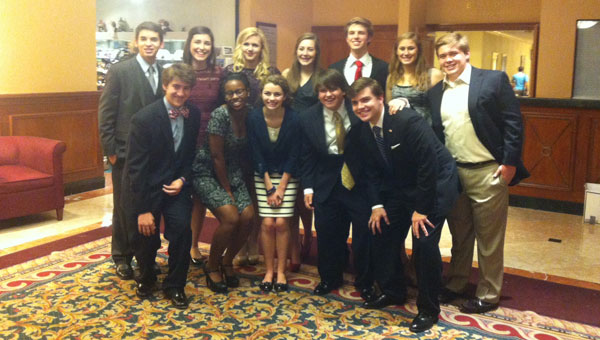 These Spain Park students are waiting an extra few days to get home after being stuck in New York City because of Hurricane Sandy. (Contributed)

HOOVER — Spain Park students currently stuck in New York City during the onslaught of Hurricane Sandy are on track to be home by the evening of Oct. 31, according to a school official.

Chris Ann Wingo, secretary to the principal, said the 13 students and three teachers in New York are “doing great.”

“We’ve spoken with teachers and students, and everybody’s doing great,” Wingo said. “We hope to have them home by Wednesday evening.”

The group traveled to New York City last week for the Empire City Invitational, an international mock trial competition. They are staying in a Marriott hotel close to the Brooklyn Bridge, Wingo said.

The group was originally slated to fly back Oct. 29, but that flight was canceled because of the storm.

According to an update provided by Hoover City Schools, Libby Day, a social studies teacher on the trip with the students, said the hotel where the group is staying is the headquarters for the Federal Emergency Management Agency.

“There is literally no better place to be,” Day said.

The hotel is also located in a safe zone, where people evacuated from their homes are being moved.

“I have been assured that in the event of a power outage, the hotel generators can keep us going for at least a week. There are also enough linens and food for a week,” she said.

Day said the group was able to find a Chinese restaurant that would deliver on Oct. 29, but the order did not arrive for “quite a while.”

“We called to check on our order. He apologized for taking so long, but he had to ride his bike to deliver,” Day said.

The students are also working to organize a Halloween party with other students there for the mock competition, Day said.