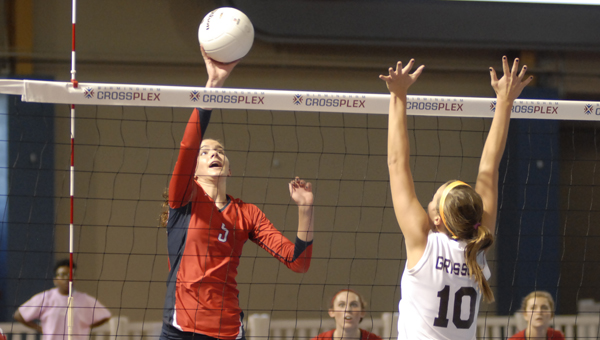 The Lady Eagles' senior Emily Cosgrove led Oak Mountain with 14 kills in their 3-0 loss to Huntsville in the Class 6A semifinals on Oct. 31. (Reporter photo/Mickel Ponthieux)

BIRMINGHAM – Oak Mountain fell to three-time defending state champion Huntsville 3-0 (25-22, 25-10, 25-20) in the semifinals of the state volleyball championship on Oct. 31 at the Birmingham Crossplex on Oct. 31.

“We had opportunities just didn’t capitalize that was basically it,” Oak Mountain coach Lance Woods said. “We put ourselves too much in a hole. You just can’t do that-they are just too well-coached.”

The Eagles were led by seniors Emily Cosgrove and Hannah Kowal in the their last matches as an Eagle. Cosgrove had 14 kills, five digs and three blocks while Kowal chipped in eight kills, six digs and an ace.  Junior Hannah Beach added four kills, three aces, 10 digs and 21 assists.

Huntsville opened the first set strong taking a 10-5 lead, but Oak Mountain closed the gap to 13-10.  The teams alternated scores until Oak Mountain was able to tie the score at 18. The teams tied again at 19 and 20, but the Panthers were just too much for the Eagles in the end, as they pulled away to win.

Oak Mountain never led the second set as Huntsville jumped to a 7-3 score to extended it to 16-3, en route to a 25-10 set victory.

In the final set, the teams took turns leading in the first half.  Huntsville put some distance between them and the Eagles by taking a 14-10 lead midway through the set. The Eagles did not go away as they fought back to close the gap to 14-13.  After another Huntsville run, Oak Mountain again fought back to close the gap to 20-17.  Unfortunately for the Eagles, they could not get any closer than three points and Huntsville locked its spot in the state championship.

“They just outplayed us and the better team won,” Woods said.

Even though he wished the season ended with a state championship, Woods was pleased with his team’s season.

“Happy as I can be,” Woods said. “We were one of the top four teams still left. Our kids overachieved in a lot of ways.  It was just fun.”

Lady Eagles rally to advance to 6A semifinals