Lady Eagles rally to advance to 6A semifinals 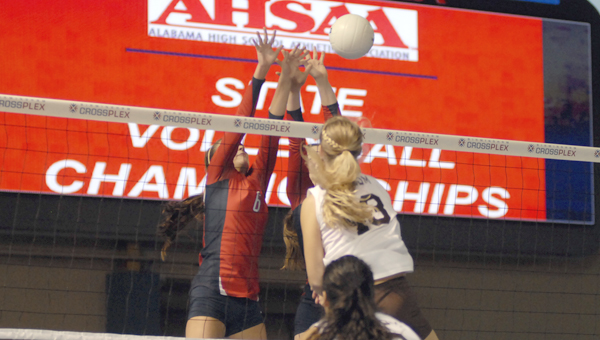 BIRMINGHAM – The Oak Mountain Lady Eagles were two points away from being swept by Grissom in the Class 6A quarterfinals, but rallied for a 3-2 victory over the Lady Tigers on Oct. 31.

“We made a position change, but the girls reacted,” said Oak Mountain head coach Lance Woods. “It was their attitude that came through for us.

“Starting off I thought we had it,” said Lady Eagles’ senior Hannah Kowal. “I was really surprised by Grissom’s quickness. Even though we went down two sets, I had no fear that we were going to lose that match.”

Oak Mountain (35-7) trailed as much as 13-17 in the third set, but came back to tie the score at 20-20 led by a pair of kills by Madison Pierce and Emily Cosgrove. The Lady Eagles took a 23-22 lead on a three-point rally, but Grissom’s Kristy Bohan put down a kill to put Oak Mountain two points from having their season come to an end.

Cosgrove put down two kills to give the Lady Eagles’ a 25-23 set victory for a 2-1 Grissom lead in the match.

Oak Mountain took the momentum from a third set into the fourth and took a 6-2 lead. The Lady Eagles used a 7-0 rally for a 15-7 advantage and never let the Lady Tigers get within six on their way to a 25-18 set win to even the match 2-2.

Neither team was ready to let their season end in the fifth set and each waited for the other to make a mistake.

“Grissom is a championship team,” said Woods. “We found a little thing that we could take advantage of to give us a second cause they are faster than us.”

Oak Mountain was able to capitalize on a pair of Grissom errors and was the first to take a two-point lead late in the match. Cosgrove put down a kill for a 14-12 lead. The Oak Mountain senior then put down her final kill of the match to send the Lady Eagles into the semifinals on a 15-12 set win.

“Emily always makes a big difference on front row,” Kowal said about her senior teammate. “It’s nice to have blocked touches from her.”

“I was really proud of my team,” Kowal said on the win. “That was the most heart and determination that I have seen us play with all year.”

Thompson’s Tara Miller leaps for a block in the Lady Warriors’ 3-0 loss to Huntsville in the Class 6A quarterfinals... read more