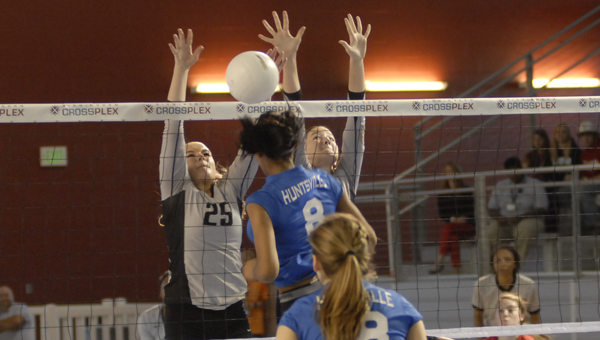 Thompson’s Tara Miller leaps for a block in the Lady Warriors’ 3-0 loss to Huntsville in the Class 6A quarterfinals on Oct. 31. (Reporter photo/Mickel Ponthieux)

BIRMINGHAM – The Thompson Warriors were no match for defending state champion Huntsville High School falling 3-0 (25-13, 25-17, 25-21) in the quarterfinals of the state volleyball championship.

“As I kind of figured with a young team, I thought we would come out a little slow from being just a little nervous, but the girls did a great job finally calming down and regrouping,” Thompson coach Kellyanne Gandy said.

The set started with the Warriors holding their own against the second-ranked Panthers until Huntsville broke open a 15-11 score by finishing the set on a 10-2 run.

In the final set, Thompson again led early on with a 7-3 lead and held a 17-12 lead just over the halfway point of the set.  Unfortunately for the Warriors, Huntsville stole the set closing on a 13-4 run to win.

“I was very excited how well we played them, especially in the third game,” Gandy said.  “I was hoping we could finish it off, but we let them come back and take it, but to be so young, I am really excited about the future.”