Penhale reflects on past 44 years 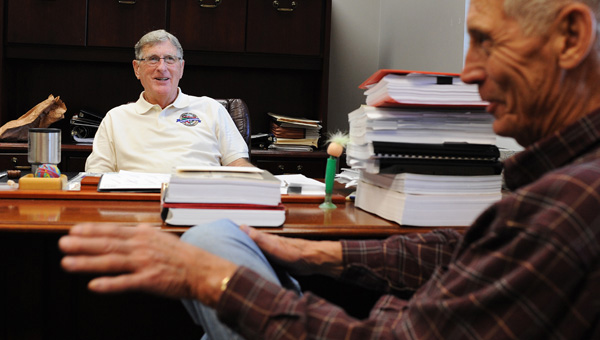 The walls, shelves and desks in the corner office of Helena’s City Hall showed little evidence on Nov. 1 of the only man who has ever occupied the office.

The only time the office was as barren as it was during the last few days of outgoing Mayor Sonny Penhale’s tenure was when the current City Hall was constructed in 1994.

“I’ve kept a lot of it. I’ve got a garage full now,” Penhale said at the end of a week full of packing and moving items collected over his 44-year tenure as Helena’s mayor. “I’m taking my desk, but pretty much everything else in here is for (incoming Mayor) Mark (Hall).”

“He’s got some stuff in there that could have been donated to a museum,” Penhale’s assistant, Joy Childers, said.

On Nov. 5, Penhale’s tenure as Helena’s longest-serving mayor will come to an end as Hall is officially sworn in during a City Council meeting. During his 48-year tenure with the city, which began when he served on the council from 1960-1964, Penhale has seen Helena grow exponentially from a city of about 1,100 residents in the 1960s to nearly 17,000 today.

As mayor, Penhale helped to secure the land for Joe Tucker Park and the current City Hall, build Penhale Park off Shelby County 58, install the city’s sewer system, develop the Helena Sports Complex, bring new schools to the city and oversee the development of the city’s residential offerings.

“The most important thing that sticks out in my mind is what we’ve been able to do for the kids,” Penhale said. “Helena has been blessed with some great people.”

In addition to his time with the city, Penhale, 82, also worked for many years at American Cast Iron Pipe Company in Birmingham and served with the U.S. Army during the Korean War. But he has no plans to slow down now.

“My plans now are to hunt something else to do,” Penhale said with a laugh. “Once your mind and your body get used to going all the time, you’ve got to stay busy.”

Penhale said he plans to lend a hand to Hall whenever he needs it, and plans to stay active with the only city he has ever lived in. Penhale also said he plans to do some traveling, and is looking to take an Alaskan cruise.

“Mark will make a good mayor. I will do whatever I can to help him,” Penhale said. “In the long run, this has been great. I enjoyed every minute of it.”