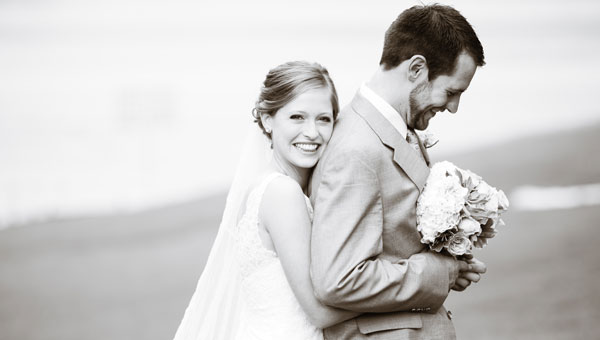 Miriam Arnett Shaw and Wesley James Lutes were married on Aug. 18, 2012, in the open-air chapel at the 4-H Center in Columbiana. Rev. Brad Moffett, whom the couple knew from Lee University in Cleveland, Tenn., officiated the 6 p.m. ceremony.

Each guest was given a fan that had been designed by Sara Collins, a friend of the bride’s since high school. A violin, viola and cello trio lead by Bonnie Furuto played as the guests were seated as well as playing all the music for the ceremony. A nine foot cross covered with white hydrangea, white stock, white Tibet roses and greenery was seen behind the wedding party. Chris Jenkins sung Be Thou My Vision as the families of the bride and groom prayed together.

Given in marriage by her father, the bride wore an ivory gown overlaid with lace and with a row of covered buttons going down the entire back of the dress to the bottom of the train. She also wore a cathedral length veil that was originally worn by Kelley Gage, her aunt, also worn by Charlotte Walton and Jenny Burton, her cousins, and by the bride’s mother in her 1976 wedding. A handkerchief was carried by the bride in memory of her grandmother, Charlotte Shaw. The bride carried a bouquet of white hydrangea, versillia roses, succulents and variegated pittosporum.

The groom is the son of Nancy and Jason Lutes of Atlanta, Ga. He is the grandson of Betty Harris of Augusta, Ga., and of Sue Lutes and the late Jim Lutes of Daytona, Fla.

Mr. Chris Jenkins of Atlanta, Ga., was the groom’s best man. Groomsmen were Jordan Battani of Macon, Ga., Rob Shaw of Rome, Ga., Ben Sheppard of Augusta, Ga., and Adam Crabtree, Thomas Ferguson, Myron Kyrs, Daniel McKee and Ryan Stigile, all of Atlanta, Ga. Usher was Adam Lutes of Augusta, Ga., and honorary groomsman was Daniel McCall who was on military assignment in Afghanistan. The groom wore a grey suit while the groomsmen and usher wore tan suits. All wore boutonnieres of white baby breath with the stems wrapped in burlap.

A reception with a live band followed the ceremony at the 4-H Center. Guests were served teriyaki chicken strips, roast beef sandwiches, marinated shrimp, colorful grilled vegetables, sweet potato bar, spinach and artichoke dip, assorted cheeses and fruit and were seated at tables covered with ivory tablecloths topped with burlap runners. Colorful garden flowers in various sizes of glass jars, which were all collected by the bride, were placed on the runners. Guests were invited to take a jar of flowers home with them as a gift from the couple. The bride’s cake was a four tier stucco design vanilla cake topped with fresh porcelana roses. The bride had painted a groom bird and a bride bird which were put in the midst of the roses. The couple made their wedding toast using the crystal flutes that the parents of the groom used at their wedding. Different kinds of cookies including chocolate chip cookies, M&M cookies, peanut butter cookies and molasses cookies were made by the bride and her mother and filled the groom’s table. At the end of the reception, the couple left through a pathway lined with sparklers that the guests were holding. Following the honeymoon to Jackson Hole, Wyo., the couple resides in Atlanta, Ga. Both are employed by Mt. Paran Church.

Photographer was Alisha Crossley. Florist was Nancy Norris with Rosegate Design of Birmingham. Caterer was Diane Olexa with Olexa’s Catering of Mountain Brook. The bride’s gown was from J. Andrews Bridal in Peachtree City, Atlanta.

Mobley-Barrios (Contributed/Juan Rodriguez Photography) Mobley-Barrios Valya and John Mobley of Alabaster are proud to announce the marriage of their daughter,... read more