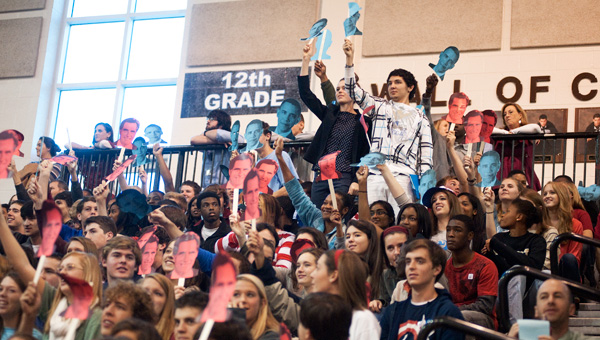 SPHS students show their support for either Barack Obama or Mitt Romney at the end of a pep rally at the school on Nov. 1. (Reporter Photo/Jon Goering)

HOOVER — While the rest of the state waits to vote until Nov. 6, the Spain Park High School community will soon know whom its students chose for president.

At the end of the school day, the student body came together for a patriotic pep rally, complete with dance performances set to classic songs such as “R.O.C.K. in the USA” by John Mellencamp. Students proudly wore “I voted” stickers and held up cutouts of the faces of Barack Obama, Joe Biden, Mitt Romney and Paul Ryan.

During the pep rally, student mock election organizers Kevin Yang, Dion Hagan, Carrie Culwell and Shannon Gunther came together to give a speech about the importance of the right to vote, outlining the history of voting in the United States.

“After 225 years, it is remarkable that (the U.S. Constitution) remains largely the same except for the 27 changes called amendments that have been added,” Yang said. “Compare this to the over 700 amendments to the Alabama Constitution, and you can see how steadfast this document is and yet how adaptable it is to a changing nation. Three such changes sought to expand the right to vote, but the process was gradual.”

However, just having the right isn’t good enough, they said.

“Despite being given the right to vote, only 56 percent of black males voted in the 2008 presidential election,” Hagan said. “That means that 44 percent of those eligible to vote didn’t.”

“As a nation, we can all do better. In 2008, only 64 percent voted. That means that 36 percent of those eligible to vote didn’t,” Yang said. “For all of the ninth, 10th, 11th, and a majority of 12th graders at Spain Park High School, this mock election was your invitation to experience voting before you are eligible.

“This mock election was your chance to witness firsthand how three amendments changed our nation, and how you can change the nation too with your vote,” Yang added.