Spain Park students back from NYC

HOOVER — Spain Park students and teachers stranded in New York City through Hurricane Sandy finally made it back home the night of Nov. 1.

The group was greeted by a large crowd of parents and friends at Birmingham-Shuttlesworth International Airport, according to Hoover City Schools spokesperson Jason Gaston. 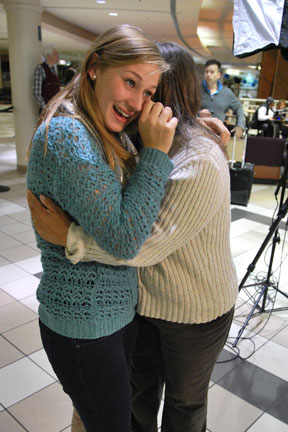 Abby Brunner wipes a tear away as she hugs her mother, Jennifer. Brunner was one of a group of Spain Park students who were stranded in New York City due to Hurricane Sandy. (Contributed/Jason Gaston)

“Whether gathered at the airport or waiting at home, everyone in the Spain Park family was elated to finally know these folks were home safe and sound,” Gaston said in an email interview. “It has been a stressful week for everyone involved, especially teacher Libby Day and the dozen or so students stuck in New York City. This certainly will be a trip they’ll never forget.”

Dr. Ken Jarnagin, Spain Park principal, was there to welcome the group back home.

“I was relieved to see the group of students and teachers finally coming toward us at the airport terminal,” Jarnagin said. “I was emotional to see the kids running into the arms of their parents. And I was thankful that we had students, parents and teachers working together to get us to a safe and successful reunion after this tough experience.”

The group of 12 students and three teachers was originally set to come back on Oct. 29 after competing in a mock trial competition, but that flight was canceled due to concerns over Hurricane Sandy.

A flight booked for Oct. 31 was also canceled before the group’s Nov. 1 flight finally got off the ground.

AWC in need of volunteers