A Columbiana man was arrested and charged in connection with the theft of approximately $4,200 of concession stand profits at a Shelby County High School football game on Oct. 26.

Barry J. McCullers was charged with theft of property first degree on Oct. 30 and released on a $10,000 bond. 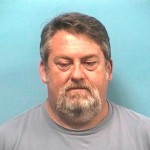 “That was the initial report,” Vick said. “That was the beginning of the investigation. He reported it as a burglary, a breaking and entering of a vehicle.”

Vick said the missing funds totaled about $4,200, which were made by the band booster club, which operated the concession stand at the SCHS homecoming game against Sylacauga.

Vick said after conducting several interviews, the CPD issued a warrant for McCullers’ arrest. McCullers turned himself in to the CPD on Wednesday, Oct. 30.

“I think (McCullers) has been a long-time member of the booster club that works the concession stand,” Vick said.

Haunted house scares for good cause

Chad and Jenny Lovelady, left with skeleton mask and purple dress, set up “The Asylum” at their Helena home during... read more