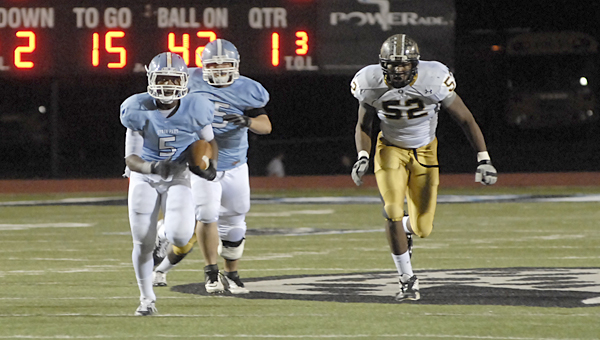 Spain Park running back Otis Harris runs for a big gain in the first half of the Jaguars' 20-6 victory over Oxford on Nov. 2. (Reporter photo/Graham Carr)

HOOVER-The Spain Park Jaguars bounced back from their loss to Pelham last week, to defeat the Oxford Yellow Jackets, 20-6, in the last regular season game of the season at Spain Park on Nov. 2.

The Spain Park defense held the Oxford offense to 29 points below the Yellow Jackets season average for points per game, while also holding star Oxford junior running back Racean “Rock” Thomas in check most of the night. Thomas finished with 114 yards on 21 rushes, but 42 of those yards came on one play in the fourth quarter.

“I was really proud of our team tonight,” Spain Park coach Chip Lindsey said. “Defensively, we were outstanding. Offensively, we ran the ball just well enough to beat a good Oxford team.”

The Jaguars were led by senior quarterback Nick Mullens, who was 19-of-25 passing for 167 yards and two touchdowns in only three quarters of playing time.

“He is just so intelligent,” Lindsey said. “He is a great kid. He works extremely hard watching film and he just is like having another coach on the field.  Hopefully, we will get to play with him a few more weeks and enjoy him while he is here.”

Mullens was helped by junior running back Otis Harris who had a solid night on the ground for the Jaguars.  Harris finished with 84 yards on 15 carries while also catching six passes for 68 yards and a score.

Taylor added a 29-yard field goal with 16 seconds left in the first quarter to extend the Jaguars’ lead to 10-0.

After an Oxford punt, Mullens hit senior receiver Drake Grisham for a 27-yard touchdown pass, with 10:01 left in the second quarter.  Taylor added the extra point to put the score at 17-0.

In the third quarter, the Yellow Jackets scored their only points of the night, when quarterback Ty Webber scrambled for a 16-yard touchdown run, but Oxford missed the extra point.

Taylor scored the final points of the game, when he hit a 44-yard field goal with 41 seconds left in the third quarter to stretch the lead to 20-6.

The Yellow Jackets had one last scoring chance, but they were stuffed on a fourth-and-goal run from the 1-yard line with five minutes left in the game.

Next week, Spain Park (8-2) will host Central Phenix City High School (7-3) in the first round of the Class 6A state playoffs.

“We have got to come to work ready on Monday,” Lindsey said. “These guys are a very good football team. They come from a very tough region in Region 3 and are very athletic and well-coached by Woodrow Lowe.”