Invention lights up roads for safety 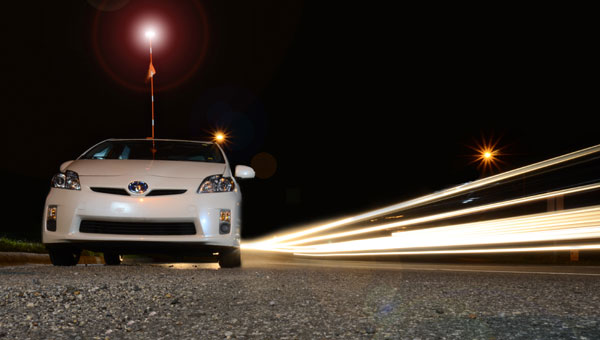 A car with the CrashFlasher on top sits on the side of a busy road. (Contributed)

NORTH SHELBY — In 2005, Nancy McMeekin and her husband, Larry, were making their daily trek on U.S. 280 after leaving their Meadowbrook home when they were stopped in traffic.

The two couldn’t see the reason for the stoppage and didn’t know whether they should try to get off the road, watch for an emergency or just continue with the flow of traffic.

“We thought, ‘You know, it would be great if we knew it was an emergency so we could be planning to get into the other lane,’” McMeekin said. “As we started thinking about it, we began to realize that a lot of people die needlessly, really, on the side on the road when their car is disabled.”

The two did some research and learned that such deadly accidents are far too common.

“It just overwhelmed me that there were so many (accident reports) that sounded similar. Someone would have a flat tire or break down and get a fender bender. They would get out of their car, and all of a sudden someone else would crash into them because they didn’t see them in time to stop,” McMeekin said. “That really inspired us.”

The McMeekins realized typical emergency lights aren’t helpful in car accident situations because they can’t be seen easily. They came up with the idea of an emergency light that would sit on top of a car, making it apparent which car needed assistance and alerting other motorists to the situation, McMeekin said.

“We did some research and we couldn’t find one. We thought there might be one out there, but there’s not,” she said. 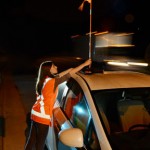 A woman, wearing her orange safety vest, places the CrashFlasher on her vehicle. (Contributed)

The idea was put on hold for a few years while the McMeekins tended to other career responsibilities. About two years ago, they began working on their idea, dubbed the CrashFlasher, full-time, McMeekin said.

About four weeks ago, the CrashFlasher safety kit became available for sale. The kit includes a CrashFlasher emergency light, a flashlight and an orange safety vest. The carrying case for the kit has a reflective orange sticker to increase visibility.

“Roadside workers have to wear these vests,” McMeekin said. “We couldn’t put together a real safety kit without those safety vests. The first thing we encourage people to do is put on the safety vest if you’re going to be outside the car at all.”

The McMeekins have put together a marketing team of six or seven Shelby County residents who are talking up the CrashFlasher to friends, family and others who may be interested in the kit. They are also selling the kits to corporations and government entities, and are selling them online, McMeekin said.

The kit retails at $119.97, but McMeekin said they will sell them at a reduced price, likely around $99, as a holiday special.

“We want people to think about this as a holiday gift,” she said.

Haunted house scares for good cause

Chad and Jenny Lovelady, left with skeleton mask and purple dress, set up “The Asylum” at their Helena home during... read more